Over at the BLOOD forums Asslessman proposed a nice group project; the basic premise is to make a Knight with some sort of connection to the creator's background and/or location.

﻿I happen to live in a place called Beeston. Bees appear everywhere:
﻿

﻿﻿Although I've since discovered that the relationship of bees with Beeston is an artificial Victorian construct, I like the idea of using the imagary to make a bee knight. It's also been a little while since I last converted anything chaotic, so I thought I'd use the opportunity to create a Tzeentch Champion, provisionally called Wultgar the Beekeeper.
I finally obtained all of the components for Wultgar yesterday (thanks to several Oldhammerers who assisted); here's the source material: 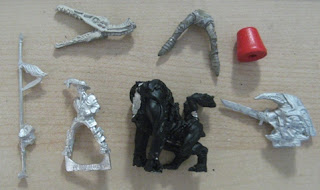 More progress here when I get started!
Posted by axiom at 11:24