Back in April 2012, I converted up a Skaven Blood Bowl player , converted from a couple of Skaven and the Chaos Star Bilerot Vomitflesh. He very quickly became known as Fat Rat; here's why:

﻿
Fat Rat started the seed of something...I decided I wanted to make a Skaven Blood Bowl team. Not just any old team you understand, but a team where every model is different and unique!

This started off a very long term project that ran until May 2013, where the end goal was to take my unique Skaven team to one of the world's premier Blood Bowl tournaments, the NAF Championship. This first post (probably in a sequence of two or three), will cover the making of the models.

Setting out the Principles
Fat Rat showed me that I could make a pretty characterful figure using old models. My favourite Blood Bowl team however, has always been Jes Goodwin's Skaven. I wondered whether I could make a team in that style, using those models, but tweaking them to make them unique?

My next player was a two-headed lineman, made simply from splicing two existing Skaven players and covering the join. So far, so simple!
A brutal Blitzer made from more Skaven pieces and a chaos beastman followed, complete with sculpted pads and helmet parts:

﻿
And then a 3-legged kicker made from yet another lineman and a kicker:

The kicker was at that point one of the most complicated conversions I'd attempted and involved completely dismembering two models and reassembling them, all with the aim of recreating this artwork in model form: 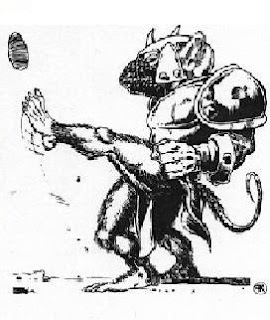 I tried my hand at a bit of sculpting, and turned a plastic pre-painted AD&D Girallon into a rat ogre:

After that, it didn't really stop!

More and more classic Blood Bowl and fantasy Skaven were fed into the machine to churn out Blood Bowl players. You might even notice the odd human, elf and even goblin component. I've since calculated that for the 16 players and 3 support staff to date, 49 models were cut up or provided components for the team!

The completed team can be viewed on my Blood Bowl teams page.

That's it for now! Part 2 will showcase the painted models.