In spite of having been a gamer for over 25 years, I have always lacked decent terrain. When I was a kid, we didn't care. When I played in a club, I used the club terrain. Even now, my regular gaming nights are at GW's Warhammer World, and there is plenty of terrain on offer (even if it is a bit homogenous). One of my ambitions for 2016 is to rectify this. I already made some terrain last year, but this year I'd like to increase the amount I have with the ambition of creating a fringe world settlement, complete with a range of buildings and warehouses, landing pad and hopefully a larger administrative building.
To get back into the swing of terrain, I've been putting a couple of painting sessions aside over the last few weeks to paint up some smaller scatter pieces to 'dress' the larger set when complete. To my mind scatter terrain is hugely important - it helps to create a believable environment for your characters to inhabit. Tables without scatter terrain can look rather bland and unrealistic.
Read more »
Posted by axiom at 16:12 17 comments:

﻿
With eight days left to go until the international Frostgrave extravaganza I'll be attending in Ireland, there were a few things I needed to close out ahead of the game. One of these was to create some nice looking treasure and spell tokens for the games.
My tokens have been based in exactly the same way as my Pan Tangians (hence the lack of snow and presence of a more arid environment!).
First up are a trio of fairly standard treasure tokens represented by three old Citadel treasure chests. I decided to go for different looks on all three - a pale wood bound in aging black iron, a small leather clad casket, and an old chest with oxidising brass fittings. 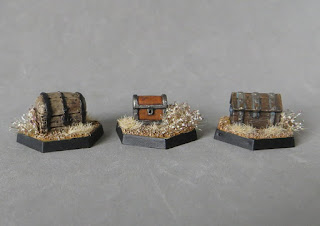 Email ThisBlogThis!Share to TwitterShare to FacebookShare to Pinterest
Labels: Frostgrave

Back in 1973 a certain Richard O'Brien wrote a musical called the Rocky Horror Show. In 1975, the stage show was re-worked into a film called the Rocky Horror Picture Show. Reviewed as "tasteless, plotless and pointless" in 1978, the film (and musical) have since gone on to be considered cult classics.
Why am I writing about the Rocky Horror Picture Show? Because Richard O'Brien played the part of Riff Raff, manservant to the alien transvestite Frank N. Furter. And Riff Raff looks like this:
Fast forward a handful of years, and in 1987, Citadel release a licensed range of figures based on Michael Moorcock's Eternal Champion novels. Jes Goodwin sculpts many of the range, including Tanglebones, manservant of Elric, the Melnibonean Emperor. And Tanglebones looks like this:
Notice the resemblance?
Read more »
Posted by axiom at 09:52 27 comments: 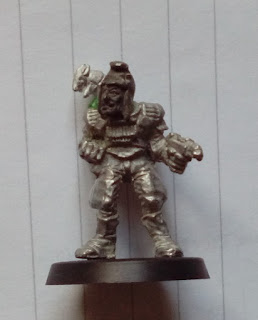 Many of you will be aware that in the early to mid-1990s, a number of companies produced licensed upscaled versions of the 6mm Epic vehicles and war machines in 28mm. I've already blogged about some of the Eldar vehicles, including Knight Titans and Tempest Super Heavy grav tanks.

A few weeks ago I posted a scenic picture of my Eldar Void Pirates. In the background was a sleek black Eldar vehicle: 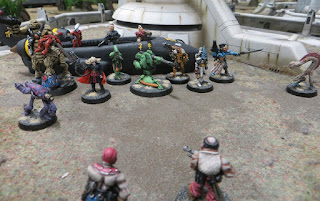 The vehicle in question is one of three vehicles designed and produced by Epicast, for use alongside Eldar armies. These vehicles, unlike others in Epicast's range, were not upscaled Epic designs produced under licence, but were created to their own design. Here's a brief overview of the three Eldar vehicles produced.