Over the years I have mentally ordered squats according to their coolness. I was never keen on the faux Celtic/Viking feel of the Warlord and Hearthguard, so they're at the bottom of the scale. I love the wildly exotic Iron Claw squats from the hand of Bob Olley, where the ordered militariness of Perry sculpts leaves me cold. But squat adventurers are great (because they're rogues and bandits, and I like rogues and bandits).
Top of the pile in my book are the bonkers and anarchic squat pirates. They're dripping with pirate clichés (peg legs, fancy hats and hooks). Why any short statured space pirates should be wearing outfits that ape buccaneer clothing from the 17th and 18th centuries is anyone's guess. But then it makes as much sense as Ork Freebooters sporting the styles. Which is no sense at all, but also absolutely perfectly logical!
So I'm launching on a new project without any real purpose other than self-amusement, and am putting together a squat pirate crew which hopefully will be painted over the next month or so. 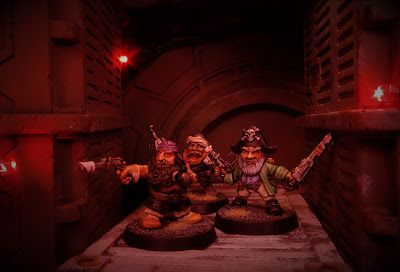 Happy New Year all! In the post holiday period I wanted a quick and fun creative bit of hobbying. Something with a little bit of modelling, but not too much. Something that could fit in with one of one of my existing projects. Painting up a new Strontium Dog was the perfect way of ticking all the boxes.