One of the fun things about making a Necromunda gang is the creation of individuals with exotic weaponry and wargear as a campaign progresses. I wanted to do the same with my Adeptus Arbites/Enforcers (counts as Venators) in my current campaign, with a web gunner and a riot shield specialist.


Neither of the new recruits are standard miniatures, but hopefully both fit nicely in my growing collection of Adeptus Arbites. 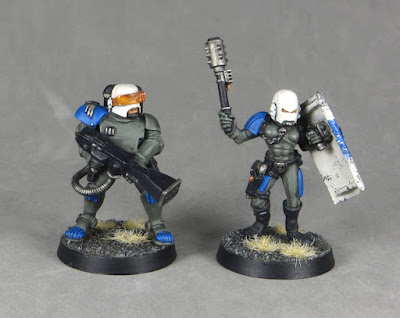 A Duo of Marauder Citizens (#makeatrish)

Over the last couple of months, ex-Marauder and Citadel sculptor Trish Carden (previously Trish Morrison) has been sharing a host of memories and pictures of many of her sculpts on Facebook. This has revealed that Trish has been responsible for many more classic figures than many people believed. As a celebration of Trish's output, the Oldhammer Facebook group has run a painting challenge titled #makeatrish. Below is my entry. 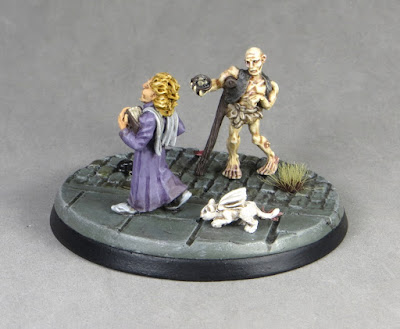 I love the concept of psychic detectives (perhaps more along the lines of 2000AD's Judge Anderson than the BBC's Jonathan Creek). That odd, isolated and strange character that is nevertheless vitally important to many investigations. The specialists with glowing eyes, non-standard interrogation techniques, and the ability to force blast crims out of the way. Every sci-fi cop department could use one!

I made the sanctioned psyker from an old Van Saar leader. I removed his right pistol arm and replaced it with an arm from an old Marauder chaos thug with bow. His chainsword was replaced with a banner pole from an old plastic space marine bike to represent a force rod. 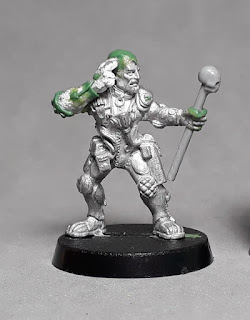 I also enlarged his cranium and added a Lobot-style psychic hood, as well as details on the right arm and tidying up a few areas. 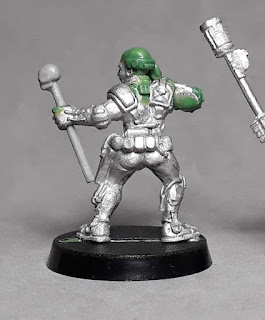 I haven't yet thought of a name yet, although 'Judge Mental' was suggested by theottovonbismark, and I can't shake it off!

I wanted to keep the same colour palette as the rest of the Adeptus Arbites, but decided to give him a sinister black bodysuit, rather than copy the grey armour. Blue accents and grey pouches tie him to the rest of the Arbites. 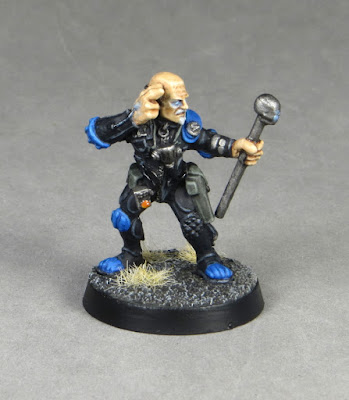 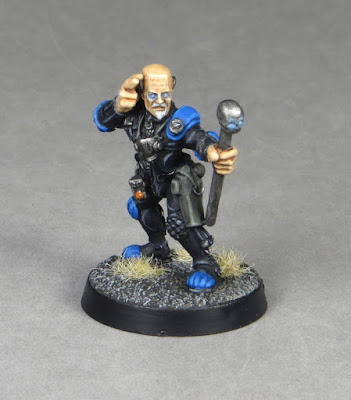 I painted him mid-psyching(sp?), with a blue glow around his eyes, force rod and psychic nodes on his suit. 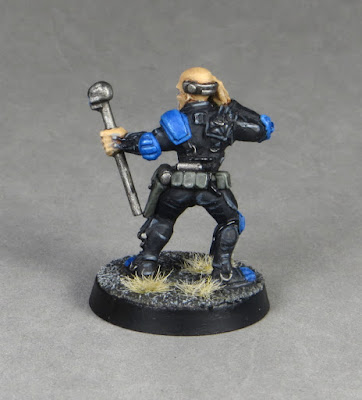 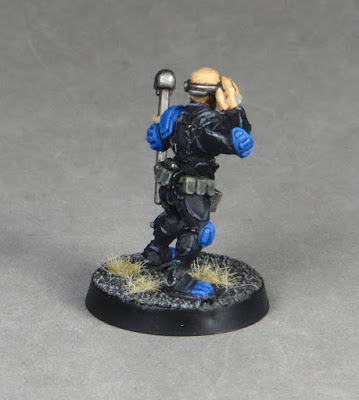 I plan to use him in Necromunda, which is a little problematic currently as psykers are few and far between. Initially I'm going to give him some esoteric weaponry to represent his powers:

I could add in further 'powers' later by giving him a bio-scanner (psychic detection) or stimm-slug stash (psychic boost). I'm sure there's plenty of other off-beat gear he could use!