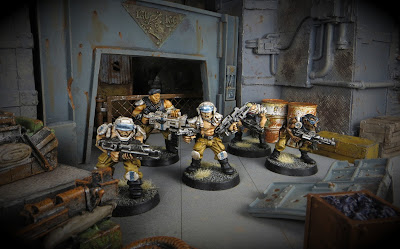 Back in 2017 I painted up a little display base for the retinue of one of the most infamous Inquisitors in the the 40k canon; Inquisitor Obi-Wan Sherlock Clousseau. I gave the Stetson-wearing Inquisitor an ecclectic group of companions, comprising his pilot, navigator, psyker and ratling chef.

Back in the early 2000s I started to get interested in revisiting some of the oddities and aliens from the 40k universe. I acquired Iron Claw space pirates and ambulls. I built a zoat army and gave one of my Eldar Warlocks a gyrinx companion. I also painted a piscean warrior in around 2004. Ten years later, I bought and painted a piscean warrior homage from the talented hands of then amateur sculptor Diego Serrate Pinilla through the now-defunct Oldhammer forums. At that point in 2014, I put my original RT piscean warrior in the stripping jar and boldly stated that I would paint it up in a "brand new matching paint scheme".

It is now 7 years later. Diego has since launched a pretty successful miniatures company, Knightmare Games, where you can still buy his fishman sculpt. And I have finally repainted my Rogue Trader piscean warrior!

As part of my ongoing prep for future Stargrave games, I've been looking at models needed to fill in the bestiary slots for Encounters. Some of the bestiary options will be filled from my existing collection (bounty hunters, repair bots and drones for example), where as others will be new paint jobs on figures I've been planning on getting round to (like the Warbot / Rogue Trader robot from last week). Some creatures necessitate some brand new models, so I've started looking around to see what might fit. 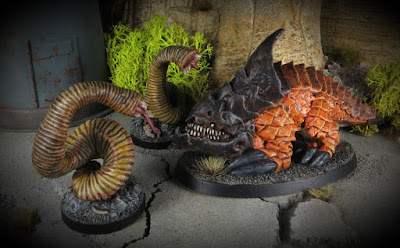 Rogue Trader robots are such brilliantly fun models, with their eccentric configurations and wide variety of styles. The bubble-bodied Castellan with its 'Lost in Space' vibes is my favourite, and I've wanted to include one in my deep space salvage crew for a while. It matches the aesthetic of the LE01 power armour troopers brilliantly, with the rounded shapes and big 'R' (for robot?) that mimics the 'P' and 'A' on the troopers.

As the Stargrave bestiary necessitates a warbot (a large robot with multiple shooting attacks), I decided to kill two birds with one stone and paint up a RT robot for the salvage crew and act as a warbot should I roll one up on the Stargrave encounter chart.