Every so often this hobby throws up a little slice of serendipity: someone says something which sparks an idea for a new model; you watch a TV programme and think of a cool new scenario; you drive past a truck and immediately want to copy its livery as a new colour scheme.

Yesterday, I had one of those serendipitous moments. I went to post my newly painted Elite Ganger over at the Yatribe forums, and I see an announcement for a new painting competition, launched the very same day that I painted my ganger.

The theme of the painting competition is A House of Cards:

Build a group with at least two members of a Noble House, Brats, Servants or a Lord for Necromunda... A Made Ork, who earned his place on the hulk for Gorkamorka... or an equivalent for Mordheim - Mayor, Knight!


My mind fizzed at the idea - that's exactly the kind of figures I enjoy working on. There and then I decided that my Elite ganger would be a bodyguard. I just needed somebody for him to guard, and probably a third figure for my grouping. I rummaged around in my boxes and turned up a nice little pair of figures: One Man And His Dog

He's the Leader from the Elite Gang from the rather uncommon Confrontation range, circa 1991. Although he was available in blistered packs of hive gangers, the bulk of the Confrontation figures were quietly retired and replaced in the mid-1990s by Necromunda gangs. I particularly like the contrast of his absurd outfit with the mean muscle-dog and AK47 styled autogun.

I would guess that I spent in the region of 10 years looking for this guy on and off, and I was delighted to pick him up with a bunch of his fellow Elite gangers earlier this year.

Yesterday I posted my WIP 'stage set', intended to be used inside my Foldio light box when I photograph my figures. What I didn't do was take any photographs showing how the thing works.
Below you can see the set inserted into the Foldio. You can see it sits pretty snugly inside, but still leaves enough height to the inside top of the Foldio where the LED strips are mounted.
﻿ 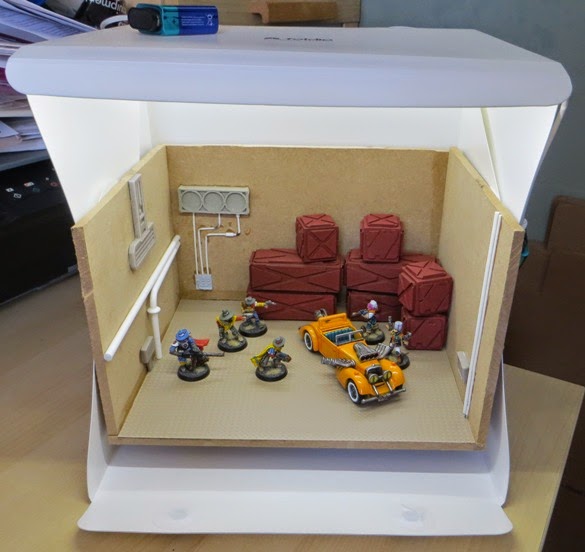 For a long time I've wanted a nice range of sci-fi civilians, but I've never found anything that quite hits the late 1980s sci-fi vibe I was after.

So eventually I bit the bullet, and have ended up involved in a mad-cap scheme to make some myself. The resulting 6 miniatures have been sculpted by Michael Anderson, based on concepts by Will Beck. 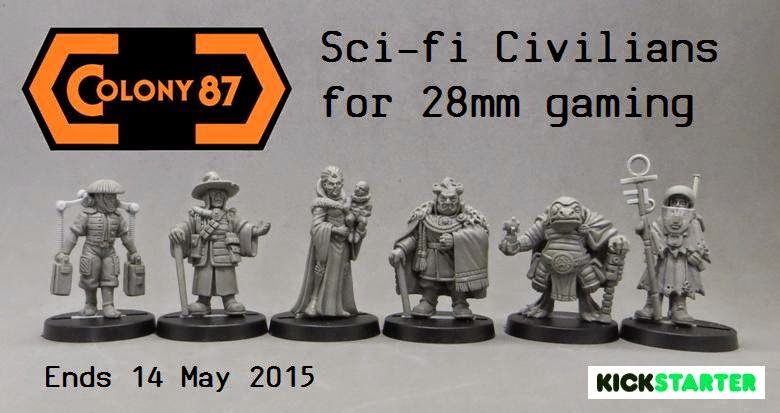 I'm delighted with the results and can't wait to have them cast and painted. Oh did I mention you could have some too?!

Feel free to check out the Kickstarter: https://www.kickstarter.com/projects/62661939/colony-87-28mm-sci-fi-civilians/

Email ThisBlogThis!Share to TwitterShare to FacebookShare to Pinterest
Labels: Colony 87

Last year, with the aim of improving the quality of photographs of my figures, I invested in a portable lightbox in the form of the a Foldio.﻿

The resulting images have certainly been much better lit, and have maximised the potential of my rather inadequate camera. But while pictures like the one below are all very well for showing off figures, they not particularly exciting. 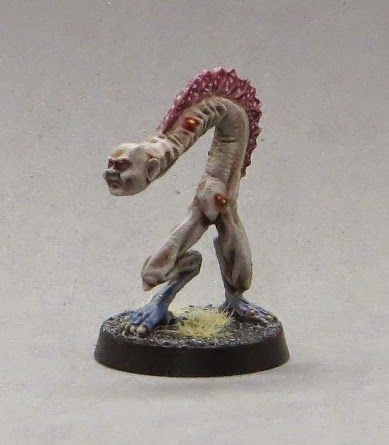 The neutral grey background is rather, well, neutral. And when you start posing figures together they tend to look a bit silly without wider surroundings. What I love to see is miniatures photographed in situ - with a nice backdrop or some terrain to enhance the look. I know from experience that I don't have the patience or photography equipment to make the most of miniatures in terrain. In fact I don't even have enough terrain. So my solution is to build a flexible backdrop which fits into my Foldio. By moving elements around and even creating drop in walls, I can vary the setting ad infinitum, and hopefully get some nice, well-lit and narrative photographs as a result! 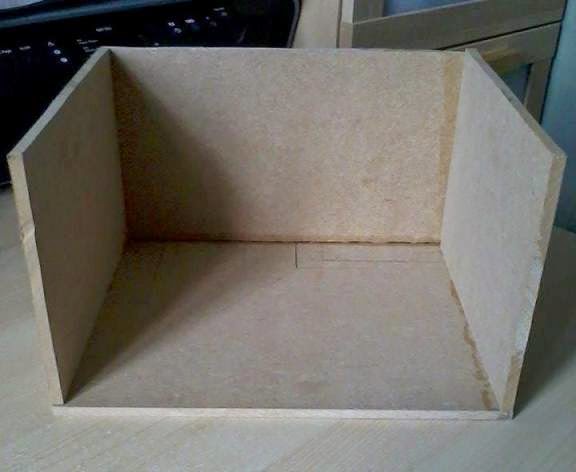 In 1985, I hadn't yet encountered minatures, roleplaying or wargaming. I hadn't even read 'The Hobbit'. In fact, the closest I had come to the fantasy genre might well have been 'He-Man'. My older cousin was very much into AD&D, but we were under strict instructions not to look at any of the books or magazines in his pit of a bedroom. Why am I talking about 1985? Because Imagine Magazine published a Michael Moorcock special edition in January of that year: 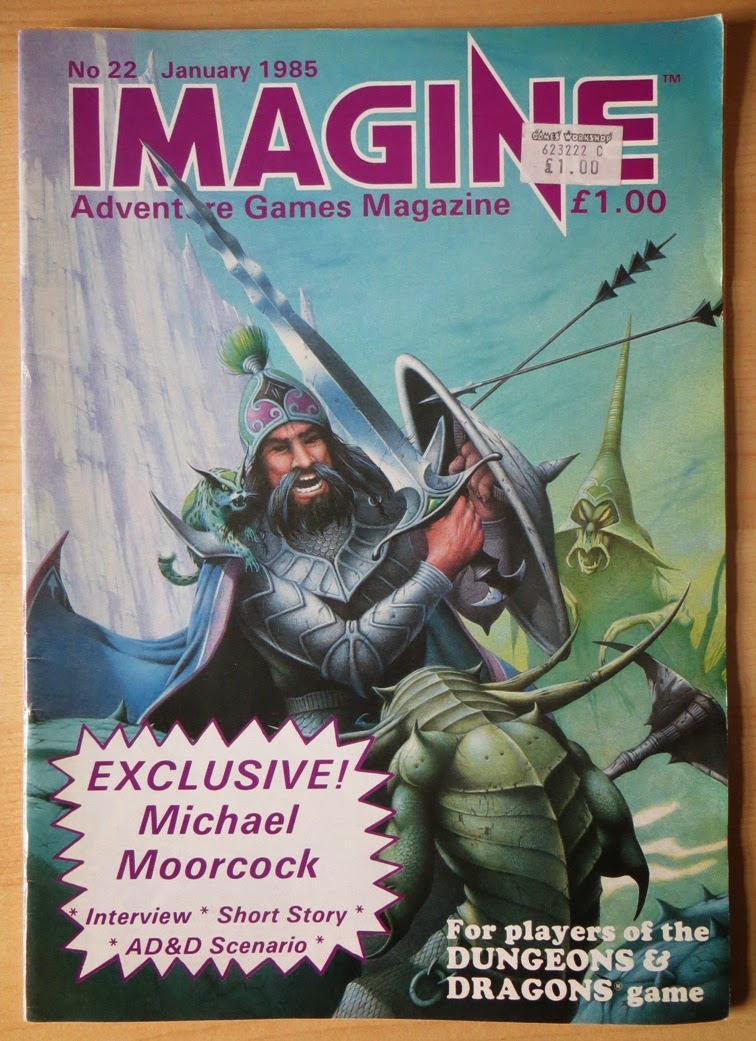 Imagine Magazine ran for around 2.5 years, covering D&D and AD&D for UK readers. While roleplaying is something that's never really interested me, I've long had a soft spot for Michael Moorcock's fiction, and have spent many happy hours collecting Citadel's Eternal Champion range, based on Moorcock's characters.
Last year, in conversation over at the Oldhammer forums﻿, it was mentioned in conversation that Jes Goodwin had done some illustrations for the Moorcock special edition. It's no secret that Jes Goodwin is my favourite miniatures designer - his Realm of Chaos era figures are sublime; his elves and Eldar are graceful and elegant. He is also a top notch illustrator, having studied Fine Art. If you have never had a look at any of his miniatures concept sketches, you should track down a copy of 'The Gothic and the Eldritch'.
Read more »
Posted by axiom at 09:37 5 comments: