Over a year ago I started putting together a Brat gang. I'm not entirely sure why - there was no real reason behind it, other than the appeal of the models.

In the intervening 12 months, the Brat gang has evolved into a fun (and flamboyant) modelling and painting project. Of course, Brats need somebody to fight, and somewhere to fight. The logical result of this realisation was to start buying up other suitable models and terrain. This morning, another shipment of models destined for a life of fighting Brats arrived. Feeling very pleased with my latest purchase, I laid out all of the WIP and unpainted models. All 65 of them... 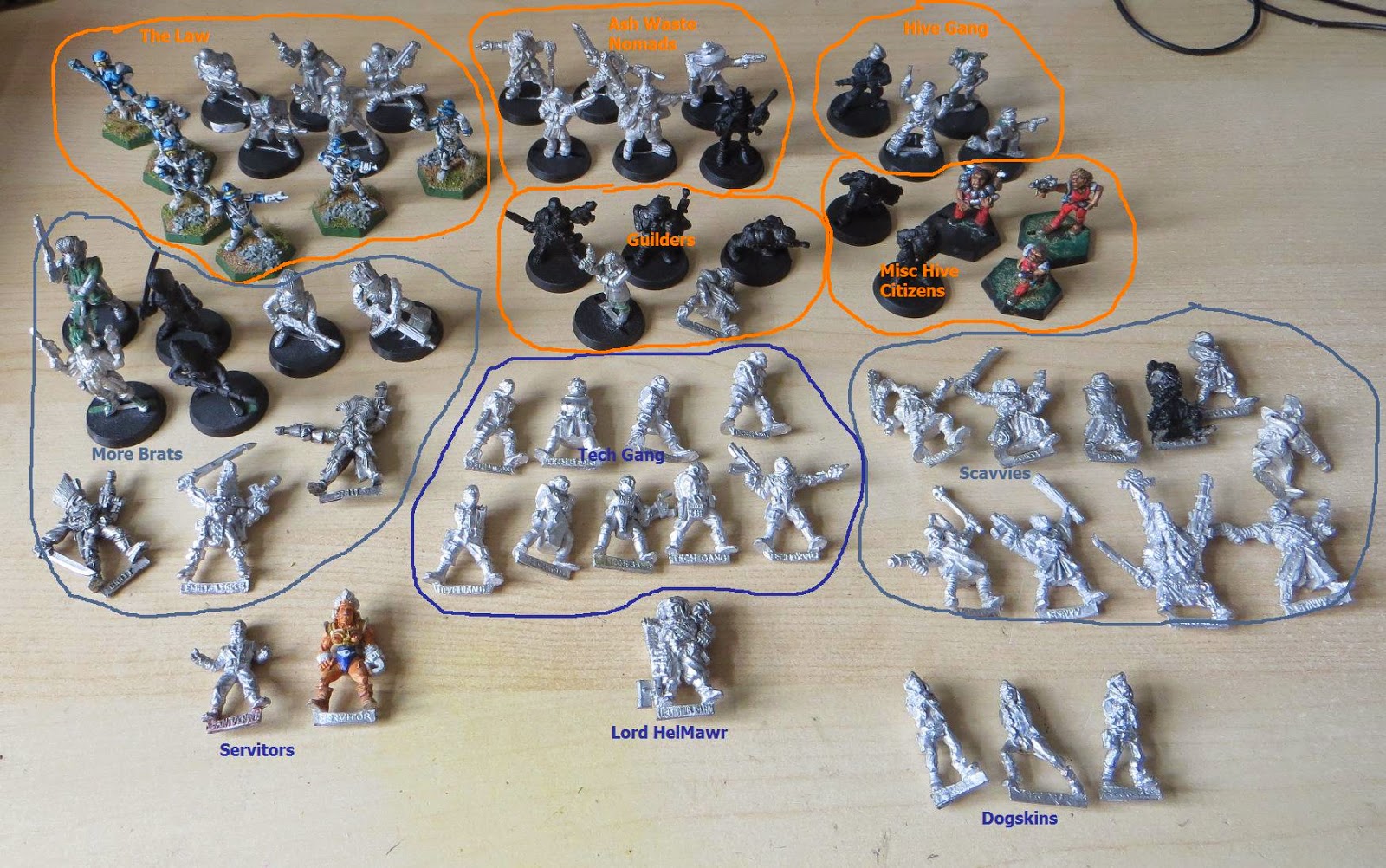 I'm particularly enjoying pulling on less well-known ranges like Paranoia and Judge Dredd. With a bit of tweaking, some of the figures are perfect for a Confrontation setting. Here's a closer look at the WIP pile:﻿

The Law: Some Adeptus Arbites rub shoulders with Paranoia Blue Troopers and Security Troopers (the Paranoia figures need stripping). Alson in here are a pair of Imperial Agents converted from some Commissars.
Ash Wastes Nomads: Marauder figures from the early 1990s plus a conversion of my own.
Guilders: The outstanding members of the Junction Trading Guild built around the Spacelords Adventurer; 4 hired guns and another Guilder.﻿ 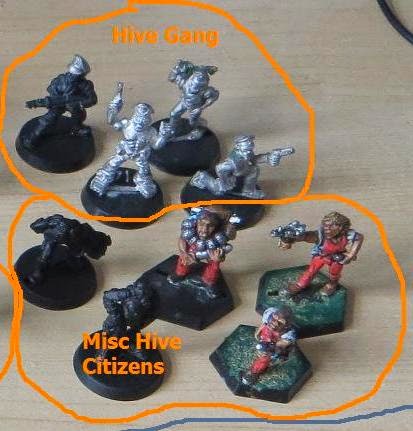 Hive Gang: A generic 'everyman' gang, currently only 4 members strong. Their iniation rite requires recruits to steal a cap from an PDF officer...hence all the peaked caps!

Hive Citizens: This bunch includes the pair of pilots I showed a few weeks back (Citadel Adventurers and Spacelords Starship Crew ranges). The trio in red are all from the Paranoia range; the chap with the big shell and necklace of grenades looks ideal for a Necromundan ammo dealer. 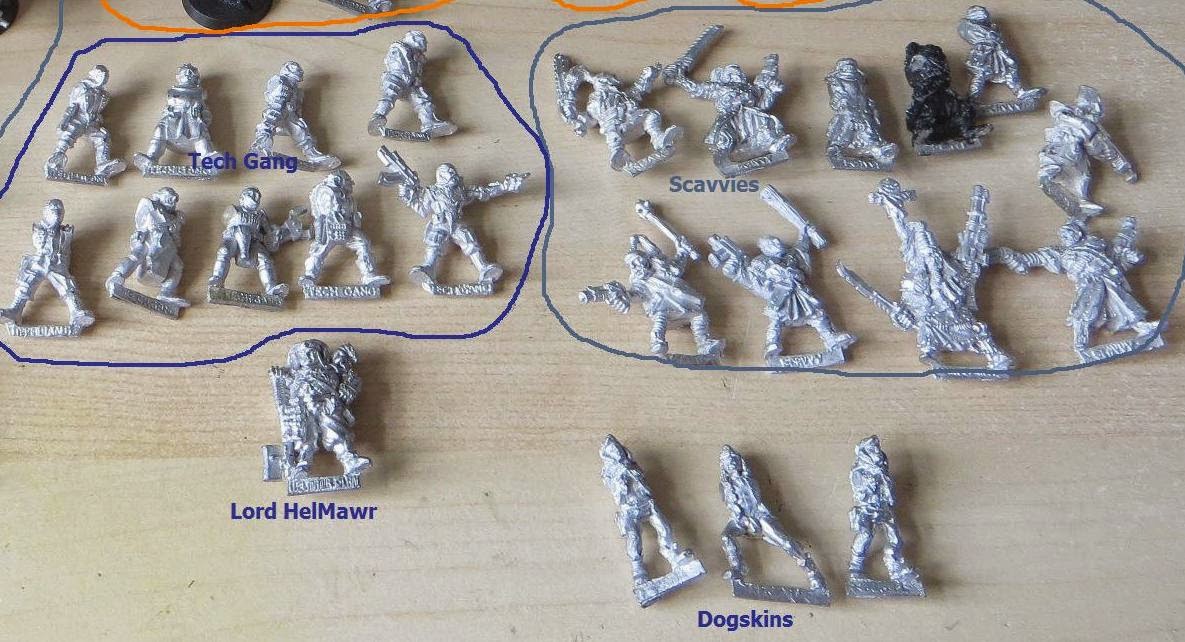 Tech Gang: If you believe the artwork, Brats always get beaten up by Techs. I just need to obtain enough arms to actually build them!

Scavvy Gang: A mix here of Citadel and Marauder, released and unreleased. This Scavvy gang will be built as slavers; I have plans for a small slave train to accompany them.

Lord Helmawr & Dogskins: I picked these 4 figures up just because they're correct for the setting. If anyone has a different Dogskin they want to swap for my duplicate, let me know! 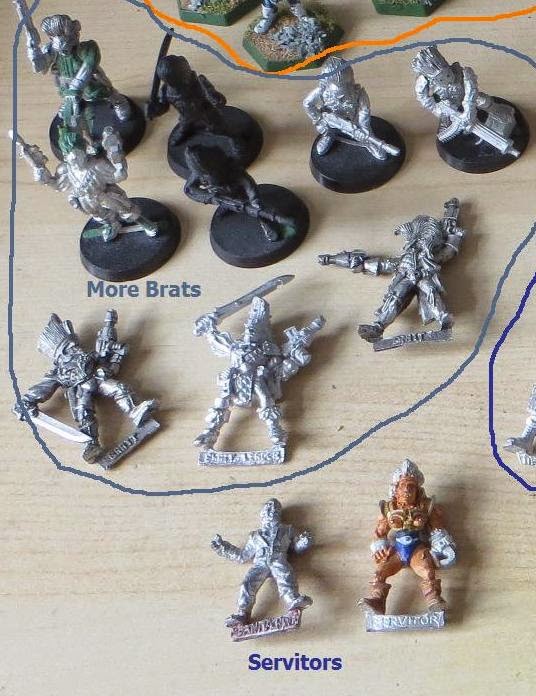 Brats: How many Brats does one man need? Not content with 6 plus a car and a bike, there's another 9 here. In my defense, I always envisage them moving around in big packs.

Painting up the Guilder gang is top of the list, then I'm likely to move onto the Ash Waste Nomads. Although at current painting rate, that will be some time in 2015!
Posted by axiom at 15:23