Monday night is painting night, and this little fellow is the result of last night's session: 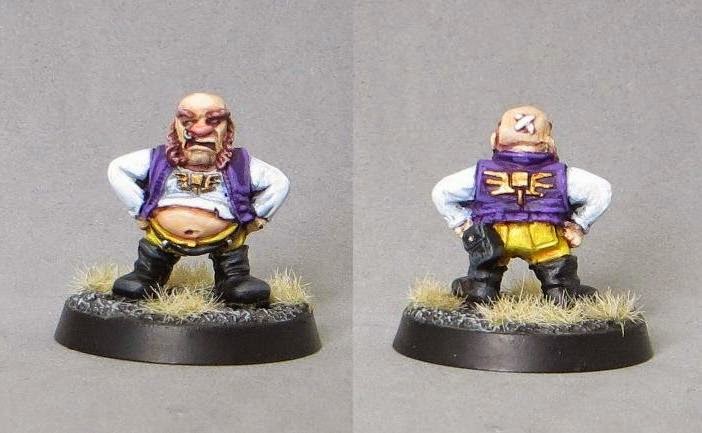 This pretty grumpy looking Squat was pulled out of the leadpile as a companion to my Spacelords Adventurer. I have re-Christened the Adventurer as Yakob Pento, a senior figure in the Junction Trading Guild at Hell's Junction in Hive Palatine on Necromunda. And as we all know, any well-respected trader needs a retinue of hangers on and hired guns...

Squats are no rarity on many Imperial worlds, renowned for being excellent technicians as well as prolific traders. That said, the few Squats on Necromunda tend to be confined to Hive Palantine’s alien and abhuman quarters. Gatt Dalvurth is a trader with decades of experience, particularly in the buying and selling of the exotic and unusual. He succumbed to drink and gambling during a short stop-over on Necromunda, only to find himself sold into slavery when he was unable to settle his debts. By a circuitous route, he entered the retinue of Yakob Pento and has acted as Yakob’s personal advisor and appraiser of off-world items for the last 15 years. Although he bought himself out of slavery over 10 years ago, he has a taste for the lifestyle Yakob’s business activities provide, and elects to remain at the centre of it all.


Gatt got the same colour scheme as Yakob, but with a bit of switching around so they don't look like they're entering a mini-me competition. I also varied up the colour of the skin for Gatt - I added a red tint to the washes, and finished the nose with a further red wash (he does like his drink after all!).

Gatt's background is part of a larger piece I've been writing to work in the figures to a Necromundan setting. So far I am working on the principle that you can find Yakob and his retinue at Hell's Junction on Hive Palatine. It is located at a major intersection between two inter-hive transport tubes, close to Palatine's shell. Handily it is also a discrete distance from Hive Palatine's starport (the only one on Necromunda). All that means that it's an ideal location for transportation, trade and smuggling of drugs, arms and various off-world exotic goods. Sounds like just the place a wealthy trader with no scruples might be found. Oh, and you'd expect Brats to come looking for kicks, and maybe the occasional Scavvy slave train too...

Eventually I hope to get Hell's Junction made into an actual game board, complete with landing pads, markets and all kinds of activities going on under the noses of the authorities!
Posted by axiom at 14:20