Enter the Sensei - Ekros the Eternal

For me, the best motivation for painting some figures is the probability of joining in a pre-organised event. The Oldhammer Bring Out Your Lead event in August at Foundry is proving to be a fruitful motivator for me - so far I've painted a Brat gang, a Brat biker, converted a Brat car, and am half-way through repurposing a toy crane.

I also got very excited when I read about JB's plans for a Combat Cards based mash-up game; The Rogue Trader Quickening. This game is a bit of a blend of concepts; namely the idea of Sensei from Realm of Chaos: Slaves to Darkness (immortal, secretive children of the Emperor) and the 1980s Highlander films starring Christopher Lambert (immortals who chop each others' heads off because "there can be only one!"). Although The Quickening is planned for Saturday and I can only attend on Sunday, there's an outside chance of a re-run on Sunday...and if that happens I want in! And if I want in, I need to make a Sensei.

So that's what I've done:

According to the requirements of The Quickening game, the Sensei needs to be armed with at least one weapon capable of decapitating an opponent (the only way to kill an Immortal). I normally spend a long time planning conversions, but with a short window of modelling opportunity, I decided to create a bits box model - a figure put together purely from what was at hand.
The base figure is Erekosë from the fantastic Citadel Eternal Champions range, sculpted by the master, Jes Goodwin. In the course of assembling my collection of Eternal Champions figures, I ended up with a duplicate Erekosë who had some damage to the bear skin on his head on the original model. I cut away the bear skin head and clipped off some unecessary pelt on Erekosë's shoulders. I created a new hat from a small shield and a dome of greenstuff, and turned some of the fur into long hair. 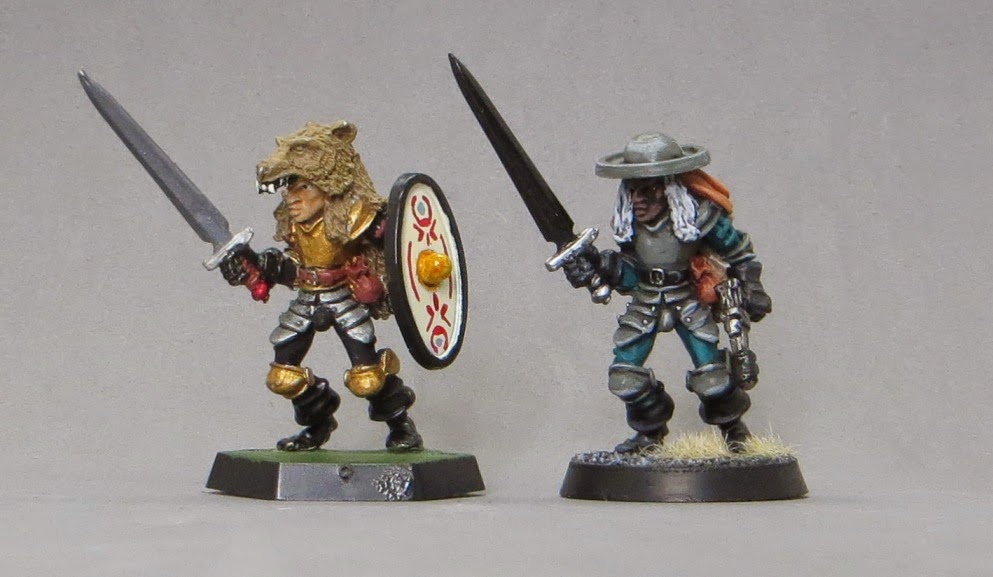 The pelt was the area which needed most attention - it dropped down the back of the figure and wasn't really what I wanted. I took out the greenstuff and sculpted a cloak over the fur and a sort of headscarf dropping from the hat. The final addition was the laspistol in his left hand.
﻿ I tried to produce a Sensei with a slight cowboy feel - broad-brimmed hat and poncho...I think it's come out alright! I painted him with similar but slightly dulled down colours to my Brat gang; the Sensei needs two companions, and although I've got a pair planned, if I don't get round to finishing them, a pair of Brats can stand-in!

I was also pretty pleased about introducing a 3rd fictional universe into the mix; Ekros the Eternal has taken on many personalities and guises in his long immortal existance, and is tortured by the clarity of memory from each one ("I remember everything."). 40k, Highlander AND Moorcock's Eternal Champion...sounds like a winning combination to me!
Posted by axiom at 09:47