Sadly due to a scheduling clash, it looks like I am no long participating in the Rogue Trader - 'The Quickening' game in a couple of weeks time at the Oldhammer Bring Out Your Lead weekend at Foundry. But not being able to join in the game, doesn't mean the Sensei I painted a week or so back doesn't need any companions. With my wife out last night, I broke out the paints and selected one of my top 10 miniatures of all time as my Sensei's first companion - Beast Trooper Gaxt.
Back in Rogue Trader, Beastmen were simply abhumans which could be used alongside human Imperial Guard, in the same way as Ogryns and Ratlings. Beast Trooper Gaxt was just one of the Imperial Guard range, armed with his autogun. My version of him is painted to match my Sensei, with a primarily dark grey scheme:


The third member of the Sensei trio is unlikely to see paint until after BOYL; I'm still trying to narrow it down from a choice of a couple of great RT figures!

*        *        *
If you're a regular over at the Oldhammer forums or Facebook group, you'll have seen that I have also recently completed my streetcar for my Brats (rather inevitably now named the Bratmobile!).
The car was converted from a 1/48 1938 Y17 Hispano Suiza﻿ by Matchbox with the addition of suitably over the top additions and crew.

The finished Bratmobile has been given a suitably flamboyant (garish?) paintjob using a Taimya Brilliant Orange spray, which gave a fantastic high gloss finish.

The driver was converted from one of the old Citadel Brats. Lots of cutting repositioned the head and legs, the arms are from a plastic Dark Eldar Hellion and the goggles came from Victoria Miniatures. 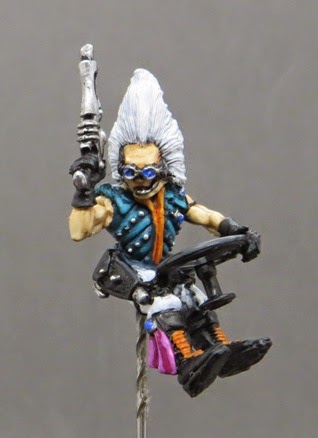 The driver also got a companion to rider shotgun - the girl he's looking to impress I guess! She's an Escher ganger from the later Necromunda range with repositioned legs. I deliberately painted her in slightly less gaudy colours as I figured the Brats are the peacocks to her peahen! 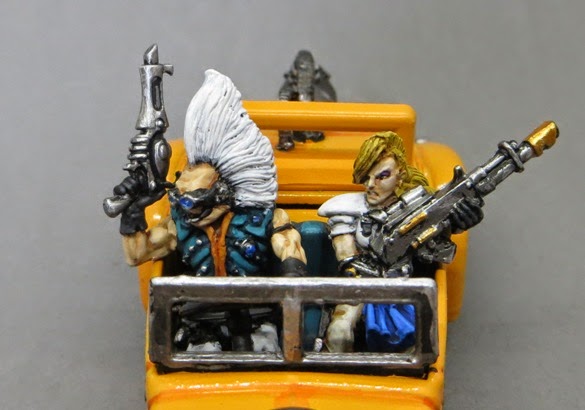