I've managed to paint up another pair of Tech gangers, to take my total up to 10. This is actually sufficient for my planned gang for the Necromunda event in a few weeks time. You'll also notice that I've swapped in a couple of different figures (the other figures will still get painted, but I've altered my list a little).

The biggest change to the list is that I've swapped out a plasma gun in preference for a heavy stubber. This was predominantly driven by an idea for the conversion - I liked it so much that I fast-tracked it in favour of the still WIP plasma gunner. In order to include the heavy stubber, I had to lose a boltgun. Happily I had a nice Marauder Tech ganger with a lasgun, so he came into the starting line-up.

The painting is nothing new - exactly the same approach as the other Techs to date. Durango with his heavy stubber had more protective leather clothing on show than most of the other Techs, as well as a higher proportion of armour and bionics. I don't mind that - it's probably a status thing for Techs. 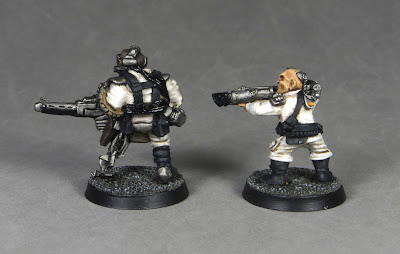 Ganger Sperry is probably the most understated of the Marauder Techs. He's completely unmodified - he has minimal gear, largely comprising the shoulder scanner and a bizarre additional barrel with an electricity warning symbol on his lasgun!

Durango however has had a significant makeover. My starting point was the Chainsaw Warrior with reaper gun: 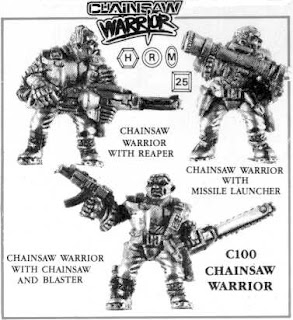 I carefully cut away his left leg, replacing it with a modern Space Marine bionic leg from Forgeworld. I then sculpted his chest armour and apron, removed his hair and then resculpted the visible scalp. I also added the visor and cranial ports, as well as a couple of other details to tie him in with the rest of the Techs. 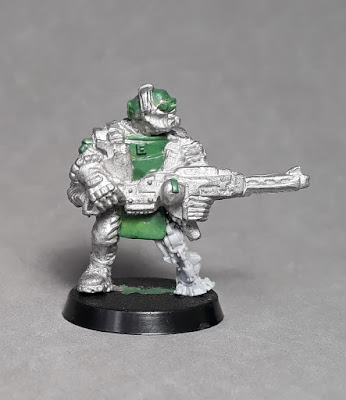 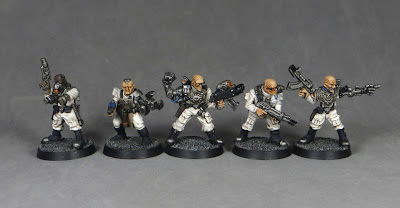 I'm looking forward to seeing how they fare in a few weeks time.