The team over at Old School Miniatures are currently running a nice little Kickstarter for a chaotic, pustulent set of travelling players, known as the Circus of Corruption. Do go and check it out. 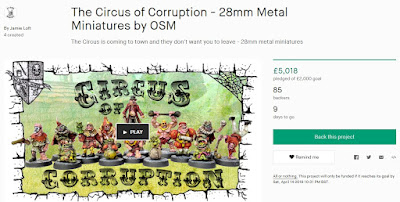 They've been good enough to send a set of pre-release resin masters to the contributors of the Scale Creep blog, including myself. You'll see the full set jointly painted up by all of the 'Creepers' over the course of the next week, but in the meantime, here's my contribution - a charming little chap named Errol Phlegm.

My preferred setting is something more sci-fi than Old World fantasy, so I took Errol and decided to co-opt him into my mutie outcasts group.


Happily, Errol fits in perfectly. After all, an outcast mutie should be dressed in rags tied with a belt. And if they can't find an old rusty pistol, then an old rusty knife will have to do! 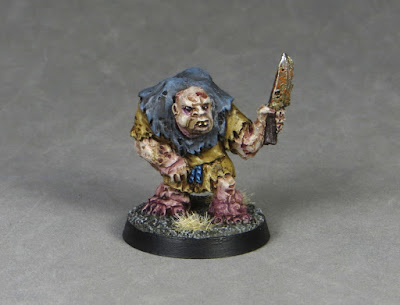 The Circus set has been sculpted by Jason Fairclough of Thunderchild Miniatures. His figures are renowned for being stacked full of character, and Errol is no exception. He's got a wonderfully stupid looking face and glorious hump. Just look at that unhealthy flaking skin, those open sores and hideously swollen ankles!


Painting-wise, the sculpt really does lend itself to liberal application of washes, so that's what did me all the hard work. I very much enjoyed getting him painted and added to the mutie crew!
Posted by axiom at 15:20