Last weekend I attended the very first Necromunda tournament at Warhammer World (well, certainly the first GW-run event using the new game). This was a free event that I'd built and painted my tech gang, the Data Kings, to use at. Prior to attending, I'd had my models cleared by the events team and GW archivist, mainly because I was fully aware that the age, obscurity and conversions on some of the models might raise suspicions!

The rules for creating and using a gang in the tournament pack followed a well-established model, commonly used in Blood Bowl tournaments. We were allowed an elevated credit limit (1,250 creds) and a package of skills and stat increases that we could scatter amongst our fighters. We were also able to access trading post weapons, hired guns and hangers on. As a resurrection format event, the gang reset after each game, so there were no advancements or lasting injuries.

The list was designed around my preferred shooty type of gang, with a couple of combat fighters just in case!

I arrived at Warhammer World at around 9.40am on Saturday morning and quickly registered, being handed my attendee badge and scorecard. 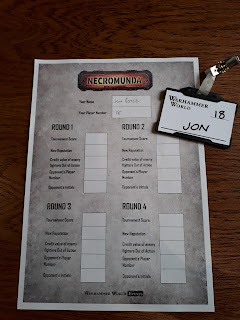 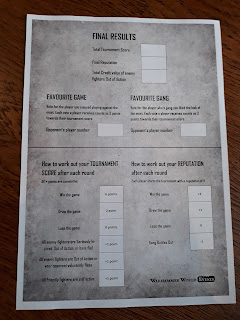 The Necromunda tables had been relocated from the usual far corner into a more prominent location near the stage and entrance to Bugmans. The tables were a mix of the excellent Sector Mechanicus boards, Zone Mortalis boards and standard gaming tables, along with the lovely Mining Facility 42 feature board.


The Sector Mechanicus Necromunda tables were great to play on, but the Zone Mortalis tables were provided with no doors, barricades or other scatter cover. As for the standard gaming tables, these were really difficult to use, with models effectively being either out of line of sight, or completely in the open. Happily the events guys were looking for feedback and took on board the need for more scatter terrain.

I was a little disappointed to see how few players there were at the event. On the day, just 18 players took part, with 40 tickets allocated. I chatted with Elliot from the events team, and a 50% attendance at free ticketed events is expected (much lower than attendance at paid events). Free events are used to trial formats, so there is good justification for the approach. The shame is that I know several other Necromunda players who were unable to get a ticket and who would have attended (and probably could have if they'd known about the dropouts).

Of the 18 players, I think there were 4 Genestealer Cults, 2 Van Saar gangs and 1 Chaos Cult. The remaining gangs were either Escher or Goliath at approx. 50/50 split. I was surprised to see I was the only player with a metal gang of any sort.

Game 1 Stand-Off v Ian (Escher)
My first game was versus an Escher gang. Ian was new to Necromunda and had only had a couple of previous games. He was using a gang made up from the pre-generated gangers in the boxed game, which meant his gang was probably over-equipped. 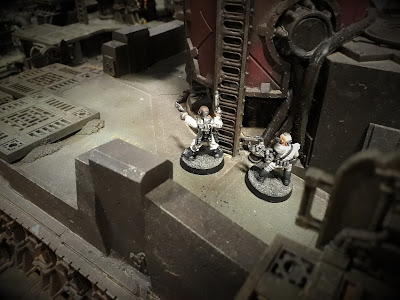 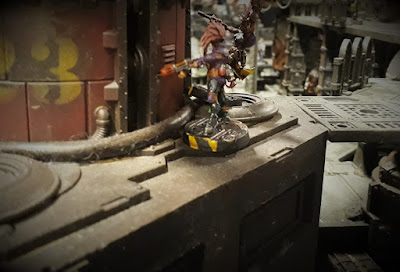 We ended up in a bit of a firefight, which was weighted towards the Data Kings with their greater firepower. In the end I'd managed to remove most of his gang, with only the loss of one of the Data Kings in return, so took the win.

The Painting Competition
After the first game, it was a break for lunch and the painting competition. I duly put the Data Kings into the cabinet, but the very deserved winner was this beautiful Escher gang (photo does no justice to the gang whatsoever!). 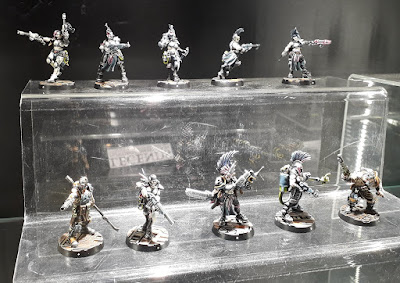 Game 2 Border Dispute v Russ (Genestealer Cult)
This was my first game versus Genestealers, and I confess I was a little worried about his Aberrants and grenade launchers. I managed to focus firepower on one Aberrant, and luckily took out a grenade launcher from a dominant firing position early on. 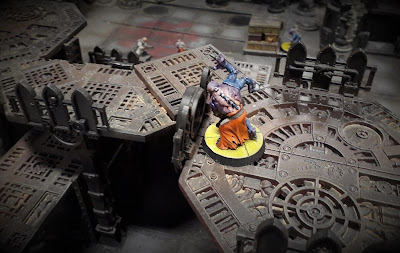 Russ had a poor bit of luck when his other Aberrant failed to leap over a 2" gap and fell 7", taking itself out of the game. This left his combat fighters isolated and after the final tally I'd taken out more of his gang and took the win.

Game 3 Stand-Off v Will (Van Saar)
Will was using what I would consider a pretty extreme list, with a small but heavily armed gang including 3 heavy stubbers and a grenade launcher. We were playing on one of the open 'standard' tables, which included a nice tall building in his deployment zone. Sensibly he set up his heavy stubbers at the top of the building and proceeded to shoot me to pieces! 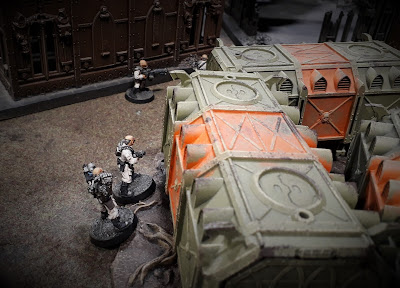 I changed my tactics and closed in to Will's gang, using the big buildings to deny him line of sight. I managed to take out his grenade launcher and enough supporting fighters to force his gang into a bottle check, which was promptly failed. From that point onwards it was a race to see who could remain standing longest! 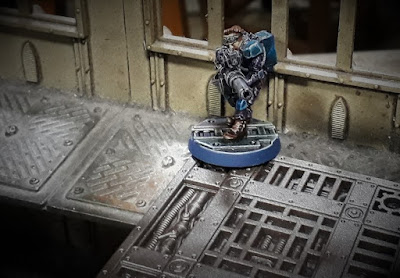 I ended up failing a bottle check also, and we entered what would prove to be the final turn with just 3 fighters left - Will had a heavy stubber champion, I had a lasgun fighter and my leader. I won priority attempted a lasgun shot, which missed. Will them promptly blew the ganger away. I attempted to activate my leader, who failed his Cool check and fled the table. The Data Kings had been handed their first loss.

Game 4 Border Dispute v Mike (Escher)
Mike was an excellent fun opponent who was severely hampered by the merciless fire corridors of the Zone Mortalis tables. The game followed a pattern which seemed to involve an Escher fighter emerging from cover and missing with a snapshot, only to be blown away by return fire from 2 or 3 of the Data Kings. 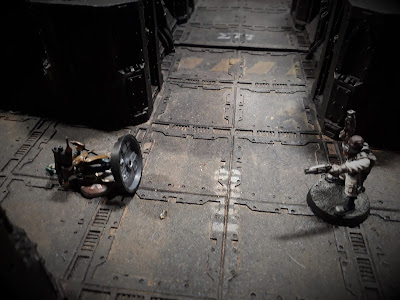 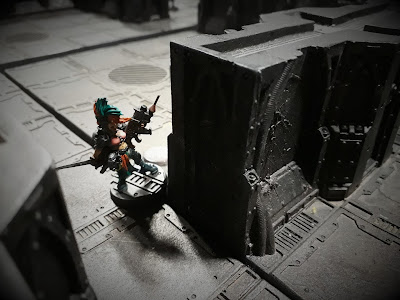 Mike was upbeat through the whole thing however, even though he finished the game with a single, seriously injured fighter on the table.

After all the tallying had been done, I ended up with a creditable 3-0-1 W/L/D result. We all handed in our scorecards and waited to see the results. 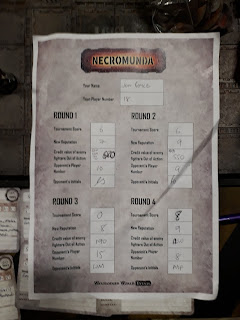 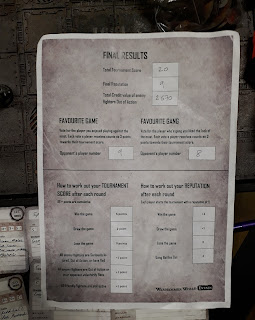 I was delighted to be awarded 2nd place (which a very canny observer suggested makes be the second best Necromunda 2017 player in the world under current rankings!). 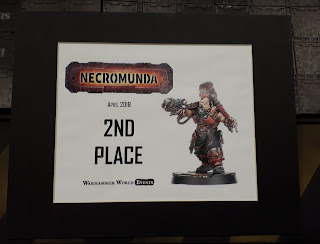 Overall I had a great event. I had 4 fun games against 4 different gangs and very different opponents. It was also great to be able to chat with the events team and hear about their plans, and to feed into the development and refinement of the format for future events. Plus I got my first ever ranking in an official tournament! I'm looking forward to doing something similar over the summer with a group of friends.
Posted by axiom at 09:37