I noticed a funny thing the other day - that there are some models that I've used a number of times. And not simply the same basic troopers that you paint because there are only 3 sculpts to go into a 10-man unit. I keep using these models for different purposes and conversions. I wonder whether familiarity means I am better able to visualise adaptation? I've managed to inadvertently do this with figures from the Rogue Trooper range, Blood Bowl and Rogue Trader.

Here are some examples:

I think I have painted the Eldar Trader five times in total. I've still got three in my collection one I use as an Eldar Trader, one as a Dark Elf Blood Bowl coach, and one as the more exotic Bonesinger. On the face of it, the trader and coach are identical, but I did actually replace the holstered pistol for a pouch on the coach! 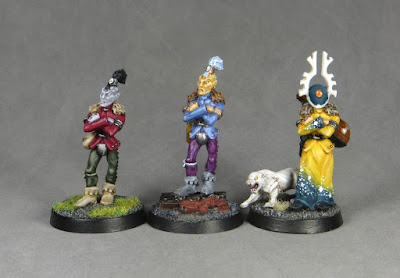 The figure is really unusual, both as an Eldar and Elf - he has a great expression and a really interesting pose - haughty and as far away from combat as you can get. I suspect that's why I've painted him so many times!

This particular Grot is a great base for a variety of conversions - the sparse detail and relatively naked frame makes him very flexible and much more easily adapted than other grots. 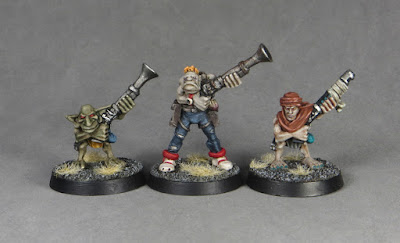 He works brilliantly painted up as a weedy greenskin, but he also looks the part as a semi-feral ratling, or even skinny torso for a pin-headed mutie.

I love everything about Brains, the Last Chancers technical specialist. Like the Eldar trader, his pose is unusual, and he lacks the typical armour of many Imperial Guard troopers. 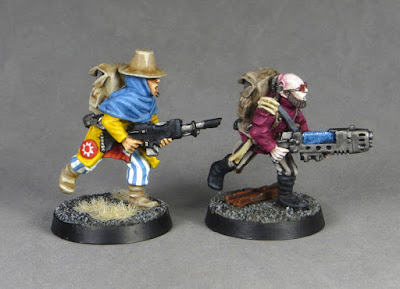 Brains appears in two of my Confrontation gangs - complete with hat and coat in my Ash Waste Nomads, and more recently as a champion in the Skallytong Boys of House Morlaque.

Hailing from Citadel's 2000AD range, Venus is unusual amongst many of her old school counterparts by being both female and relatively sensibly clad. 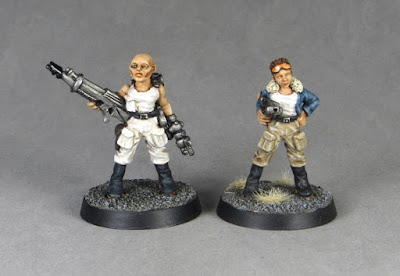 I've co-opted Venus into my Tech gang and also as a spunky pilot / adventurer, part of the (slightly stalled) 40kthulhu project.

The Confrontation range of figures are relatively uncommon, which is why I took the opportunity to convert a headless Maniak ganger into my Rogue Quest fighter from a few years back. 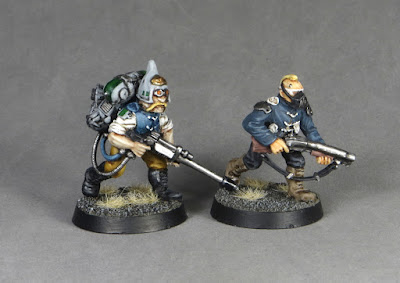 I quite like picking up damaged figures as they can spark conversion ideas, and often result in interesting figures.

When I was looking to make some additional Imperial Guard veterans for my Shadow War Kill Team, I happened to find a headless tech ganger just asking for a new life (the original head was donated to Henig Drosk, one of my Inquisimunda characters). 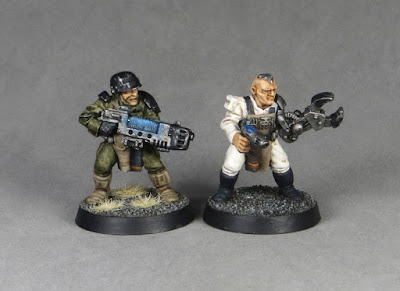 Even though both the Tech and the Guardsman are made from the same base figure, I still find it amazing how different they can look.

I'm looking forward to the next time I paint that grot. Or the tech. Or convert yet another Eldar Trader!
Posted by axiom at 15:35