I think it's fair to say that I'm really enjoying painting up these Techs. They're varied enough not to be boring, but uniform enough to not agonise over odd unique details. The differing sculpting styles are meshing together well enough too!

Over the course of the last few days I painted up a selection of four additional Techs, to give me 8 out of the 10 needed for the forthcoming event.

First up are Vobis with his plasma pistol and servo claw, and Franklin, my juve armed with a pair of stub guns. Vobis and Franklin are my concessions to minimal combat efficiency. Vobis is a ganger, technically armed with a plasma pistol and club for the event (he can't take a servo claw until the full Trading Post lists are published. He is one of my favourite Techs with that ridiculous over-sized claw! 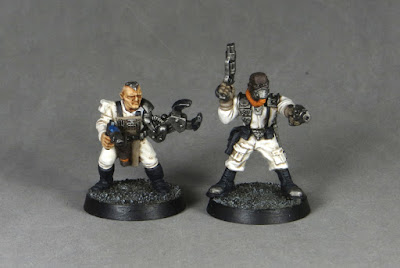 Franklin gets his pair of pistols (because a gunslinging juve is fun, if inefficient) from the new Orlock kit. He too gets a club - I cut a large spanner from plasticard and hung it on his belt to represent it. Paint-wise, the drill was the same as the previous Techs, just with a darker skin tone on Franklin for some variety. 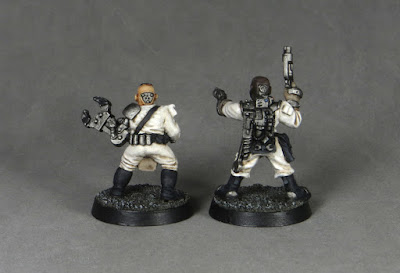 The second pairing comprise the leader of the Data Kings, Maxdata, and one of the champions, Osbourne. Maxdata is the Jes Goodwin Tech Baron - a suitably imposing leader, equipped with ostentatious chest armour, calculator and showing off his bionic muscles. 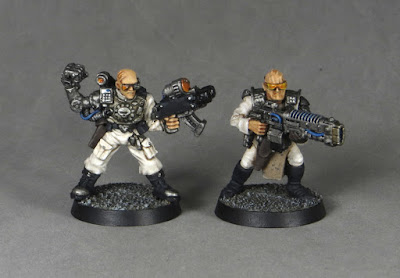 Osbourne is one of the Roy Eastland Techs, with a fun work apron and an oversized beetle-back carapace armour piece. His 'plasma' gun is a Forgeworld Volkite caliver mated with Forgeworld Death Korps of Krieg arms. 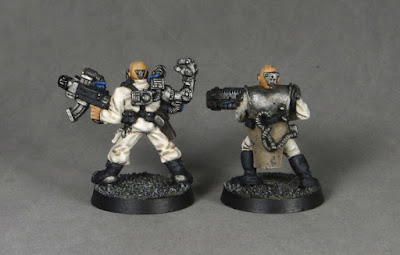 The Data Kings really are starting to look like an actual gang now!