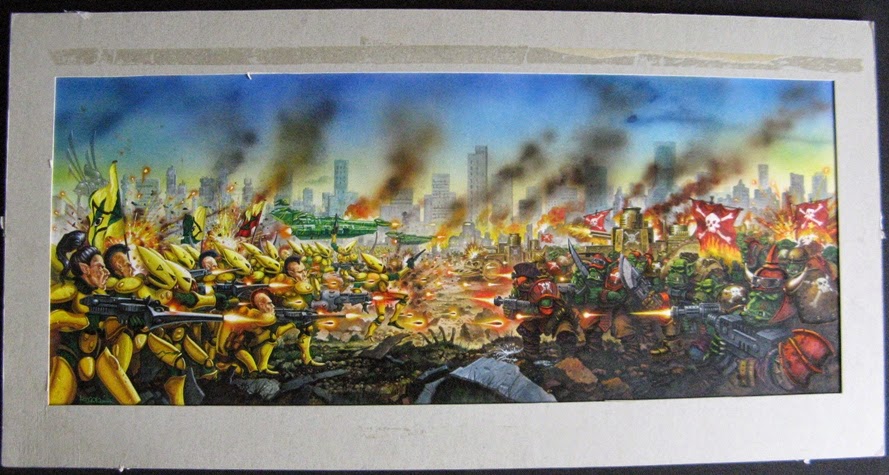 To reblog what I said on Realm of Chaos 80s, I happened on this piece on ebay - simply labelled "Eldar Artwork". When I saw the auction, there were very few details in the listing, only a couple of days left and no bids. The starting bid was £120, but I recognised the image from the Epic Eldar Legion and Ork Hordes box sets. Either through lack of interest or simply going under the radar, mine was the only bid. I was delighted when I received the painting (which looks suspiciously like it has been painted using Citadel paints) - it's pretty big (67x28cm) and has a wealth of little details which you can't make out in the cropped and resized box artwork. I spoke with the seller and asked for a few details - it turns out he was Chris Baker's son and was selling the artwork to help fund a gap year. One my mates who has a fine art degree says this painting goes against all the rules of composition - the focal point (in the middle of the painting), actually has no detail or points of interest. This makes me wonder whether the painting was originally conceived as two separate pieces for use as the box art.
So why repeat information that has already been posted on another blog? Its primarily because after over a year of searching, I have managed to track down a pair of the boxes that the artwork was used on, and I thought you might like to see the comparison shots of the original artwork against the printed versions.

Whilst I had the painting out, I though you might like to see some of the stunning detail in close up.

Hope you enjoyed refreshing your memories. They don't do box art like the used to!
Posted by axiom at 15:48