Asslessman over at Leadplague did a very nice article on Brat gangs last week, covering a wealth of background information, which in reality stems from just a few articles in White Dwarf and a couple of sets of Jes Goodwin and John Blanche concept sketches. Brat gangs just seem to resonate for a lot of people though - we can all understand the concept of a pack of overpriviledged youths turning to violent anarchic behaviour just for kicks and giggles. The idea of marrying this with dandyism - silks, perfumes and bizarre costumes just works even more!

The eventual aim of my Brat gang, the Sutter Dukes, is to include all the models GW have produced. Although there are differences in styles, my Sutter Dukes will be held together by a shared love of exotic fashion, and adherence to a strict pallette of gang colours.


Sutter Dukes be my bloods. Devilish high motley we procure and strut! Best attired and gentrified in most particular fashion. You know it; high dandy cock combs and curlicue canes be a peculiar pleasing fancy.


Oh, but ribbons and trills be not all my love-sweet! What be the point of all this flummery with no gilded pistol? Where be we young Dukes without a spill of scum-gore or hit of spook?


I’ll whisper now – we Sutter Dukes baint empty frill and flounce. Danger heads! Below the wall we hop and prance, seek and find. Glittery blades in the under-dark to drink scum-gore. It be highest jollifrey - a killing joke!

Just Who Is The Magpie Dandy?

My blog has been up and running for over 6 months now. You may have observed the strange silhouette in the top left corner on the title header. You may even have wondered what it is. Or you may be wholly unobservant and couldn’t care less!

When I started the blog, I wanted a model to be shown in the header, but for lack of a suitably interesting model, I elected to show the silhouette of my then unpainted ‘Magpie Dandy’. I converted up the model as a leader for the Sutter Dukes. I had in mind to convert up a leader type character accompanied by a familiar from the Confrontation rules known as a caryatid. I particularly wanted the figure to be non-combatant – all style and swagger! For some reason at the time, I had it in my head that he would be a bit of a magpie for the finer things in life, and it ended up being reflected in my blog title. 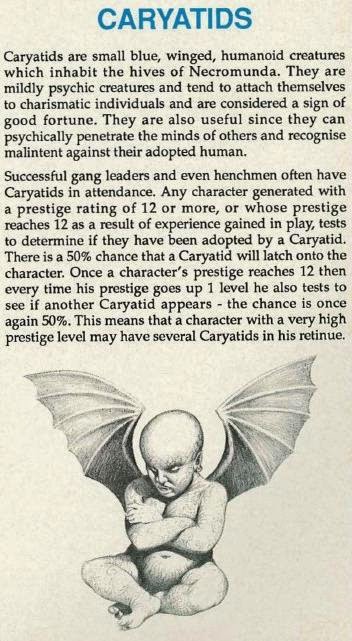 I see my Magpie Dandy as being a charismatic and engaging individual; on the rise to the top, and acting as a magnet for any ambitious Brat (with impeccable dress sense). 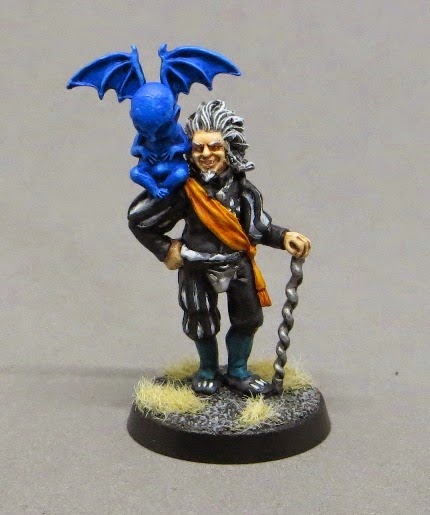 When I managed to finally find time to put some paint to the Magpie Dandy the other week, his colour scheme was reflected by the idea behind him. Given his name, he needed to be rendered in black and white, with some spot colours to tie him to the other Brats I’d painted.

As for the model itself, he's based on the Imperial Noble by Victoria Miniatures. The dandy cane combined with all the puff and slash and seemed to be a perfect look for a Brat leader. The minimal conversion work involved replacing the head from a 40k Space Wolves character (Lukas the Trickster) and adding his caryatid (a Reaper winged familiar with the horns filed flat).

Hopefully over the next few months the gang will grow to a usable size!