As I said in my last post, I fancied adding a suitable high ranking character to lead my squad of Inquisitional commandos. And who better than a dour, puritanical Inquisitor. None of the actual Rogue Trader Inquisitor models really fit the bill (mostly kitted out as they are in power armour of various outlandish designs). But the Rogue Trader rogue trader model had the perfect look with his greatcoat and no-nonsense gear. 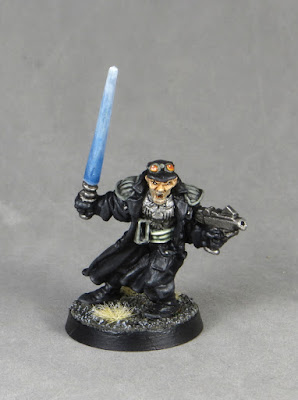 He got a matching scheme to the troopers - predominantly black with grey accents. I spent a long time debating whether the greatcoat was going to be grey or black, but in the end decided that a black greatcoat looks more sinister. I also spent some time debating his sash colour, before selecting a pale green. I didn't want anything too colourful which might look out of place.

The lightsaber power sword was a bit of a conundrum with no edges to help highlighting. In the end I just went for a fade to white which worked out better on the rear of the blade than the front. Oh well! 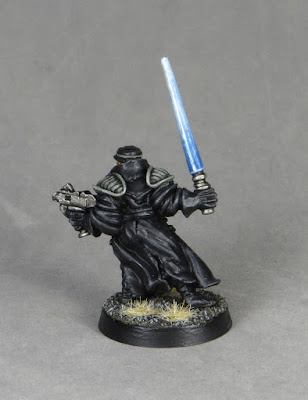 Oddly enough I think the rear of the model works better than the front overall - perhaps with fewer details there's a bit more visual clarity? 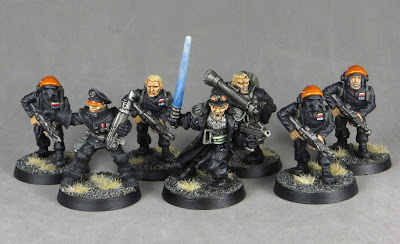 All in all, I'm pretty happy with how these guys have come together. It's been fun building the squad and blasting them out!