I was recently sent a package containing some 2000AD board game figures, including a rather excellent Middenface McNulty. As it had been a while since I last painted any Strontium Dogs, I decided to add another couple of Stronts to the collection.


Middenface McNulty is a regular Strontium Dog character - a hard-drinking Scot with a lumpy mutated head. This particular figure is a hard plastic board game figure from Osprey's Judge Dredd: Helter Skelter miniatures board game. It very nicely detailed and posed, and much better scaled against the Citadel Strontium Dogs than either the Warlord or Foundry figures. 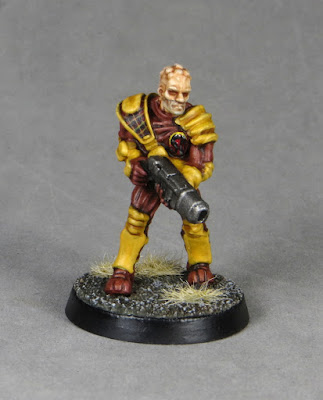 After lots of research, I decided to go with a terracotta brown suit and yellow armour details on McNulty. His tartan shoulder pad lost a little bit of definition when I made the ill-judged decision to put a wash over the top to tone it down - all that happened was that the bright red got lost. Oh well, it's sufficient to give the feel of tartan! 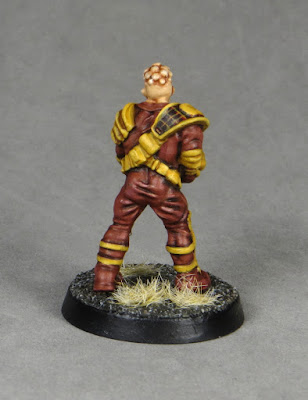 Alongside McNulty I painted up a non-comic Stront, one I'm calling Billy 'Goat' Cruyff. Billy's mutations are some little horn nubbins on his head and a luxuriant goatee beard. That's enough to make him a mutant, right?! 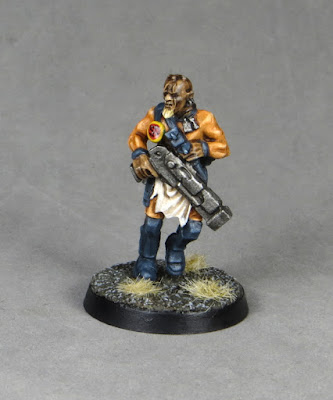 Billy is a Warlord Freeborn trooper from their Gates of Antares range. I only added the badge - the beard and horn nubbins are already on the figure (I suspect the nubbins are supposed to be cranial implants or something like that).

The figure is supposed to be bare-chested, but I painted him as if he's wearing a skin-tight top. I think he might have looked better if he was bare-chested, but never mind! I was pretty happy with his skin however - I tried a different technique, by painting a pale flesh colour then washing a couple of times with a black/brown/flesh wash mix 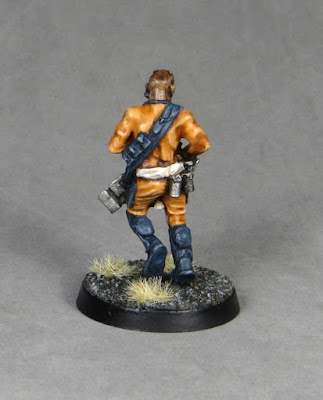 The scale of the new Stronts is pretty good compared against Citadel's Johnny Alpha - well worth bearing in mind if you'd prefer not to have towering 32mm figures looming over classic Citadel figures!


This collection of Stronts is coming along nicely now - certainly enough to band together for a bigger payday!