Proofs of Concept - How I Plan a Conversion

My approach to converting is twofold - some conversions I make up on the fly, using pieces from my bitzbox that look good together. Others I plan meticulously, especially when I'm looking to match something stylistically to an existing figure.

In my last blogpost I mentioned that I often create some very rough proofs of concept for conversions to help me decide what components I want to use. This is a very simple process, primarily using images from old catalogues (try Stuff of Legends for catalogue images) and roughly manipulating them in MS Paint before I start any cutting, or in some cases, before I've bought the models I intend to convert.

To illustrate how the process works, below are some rough concepts for my Adeptus Arbites captain.

You can see that I was experimenting with a number of different looks using components from a variety of different figures (in this case I think it was Imperial Psykers, Arbites and Space Marines. I decided that the bare-headed #3 was the direction I wanted to go, which resulted in a pretty intimidating hard-as-nails captain:

In many cases the final model is pretty close to the mock-up image, as is the case with the chaos cultist and Eldar scout below: 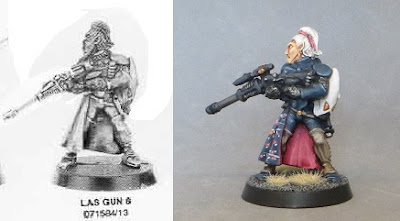 Sometimes I also draw on some detail that I plan to sculpt, like this Tech Priest. 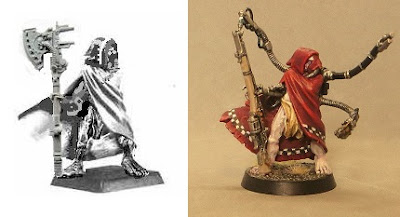 The Tech Priest is a good example of taking care with scale. I had planned to give him the Forgeworld axe which I bought from a bitz seller, only to discover when it arrived that it was more than twice the size I anticipated!

The process is also useful to plan out units like these beastmen. I concepted up eight figure but only got round to making six of them, but I know I've got a couple of spare ideas ready to go if I want to add more to the unit.

Hopefully this gives a good insight into how I plan some of my conversions and might be a useful approach to try if you're doing similar.
Posted by axiom at 15:38