My gaming group is due to start a new Necromunda campaign in mid-November. Whilst I could have retained the Data Kings tech gang, I generally like to use a new campaign as an excuse to make some new models. With the updated and revised Chaos Cult rules published, the time seemed right to make something chaotic.

I wanted a slightly different spin on my chaos cult, so decided that it would be comprised of mutants in the Rogue Trader rather than Realm of Chaos style. Forget claws and beastial faces, my mutants are weird-looking oddities, supported by some unloved human outcasts who are the lowest of the low.

I'm still debating the exact make-up of the starting cult, but it will be led by the brothers Jakob and Wilhelm, and will include as many autogun-toting cultists as I can fit in. 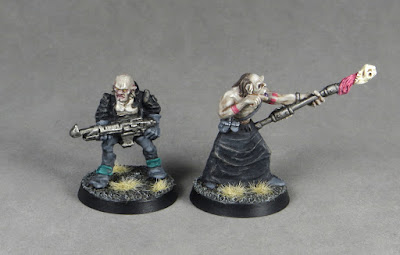 My first two figures are Teech (cultist with autogun) and Wilhelm (witch). Teech is based on a Rogue Trader space pirate with a head swap from a modern Imperial Guard ratling, which makes him look a little weird.

Wilhelm is actually an unreleased sorcerer or druid that was my prize for winning one of the painting competitions with 'Enter House Ulanti' at Bring Out Your Lead 2015. I've been waiting for a suitable project to use him in, and I figure he works equally well as a Necromundan witch as a fantasy figure. 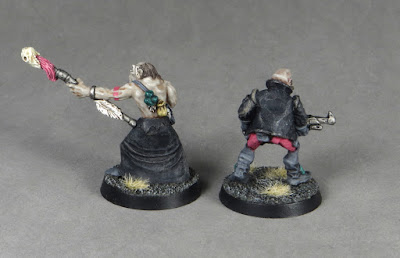 I painted both figures with the same colour scheme, basing the skin tone on the lovely Rakarth Flesh paint. I tried to tech up Wilhem with the addition of some pretty geometric patterns on his skin.

I've got a range of other figures awaiting paint, including the cult demagogue, Jakob - sneak preview below! 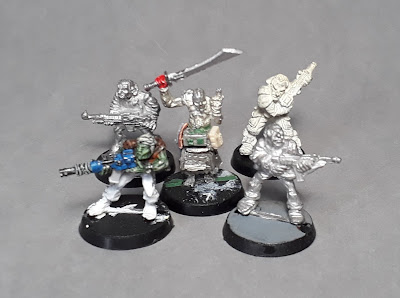