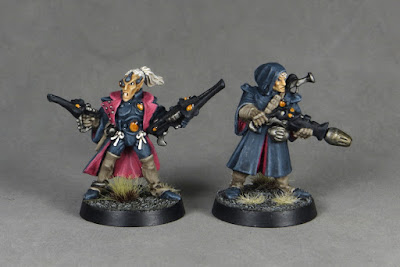 Happily Bres Ayvan has an elevated level of detail compared to the very functional scout costumes. The extra gems and ribbons, as well as the increased exposed pink lining on his coat go some way to making him stand out from the other figures. 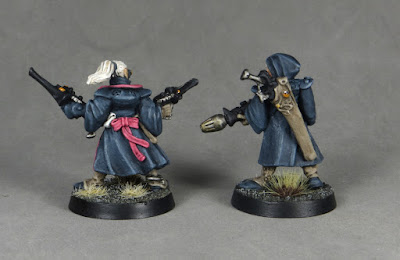 The fusion gunner started life as one of my mutilated 2nd edition shuriken catapult scouts, and had no head or gun barrel. It was fun to bring him back to life by converting his weapon with an old plastic fusion gun and adding a new head from one of Skarloc's Wood Elf archers. 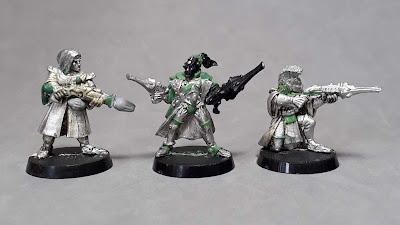 The comparison pictures below with an unconverted scout show what else I ended up doing - removing and repairing the rifle butt, sculpting a new bandolier, and adding a holstered long rifle (made from a press mould from a different scout model and a plastic Eldar lasgun). 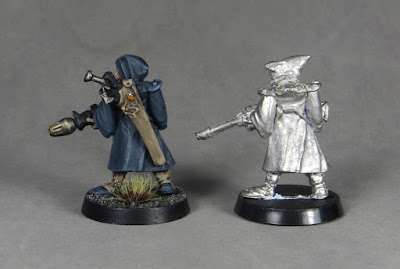 The leader was an equally involved and very fiddly conversion, with lots of stages. The base model was a Great Harlequin who had donated his pointing hand to the Giveaway Bratt back in 2014. I added a new head (Eldar champion with a Dark Elf topknot), new arms (Harlequin pistol and proto-Dire Avenger). I then sculpted the gaiters, codpiece, collar, hair and sleeves, adapted the chest armour, as well as repairing all the damage from the cuts. 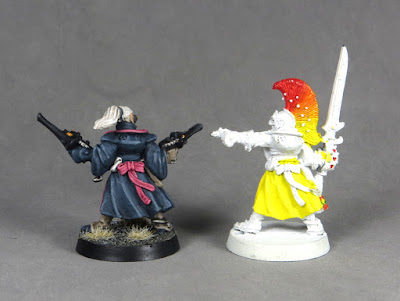 It was a really prolonged conversion, and one I was still uncertain about right up to painting him. Happily, I think the painting has pulled everything together and I'm pleased with the final result.

Just one more scout to come to complete the 10-strong Kill Team. I'll be painting him up alongside something a bit bigger to give the scouts some support!
Posted by axiom at 15:00