Getting a Little Tech Support

It just so happens that I managed to get hold of a ticket to the Necromunda event at Warhammer World on 21 April. Whilst I could easily use an existing gang or group of figures, I decided I wanted to use the event as motivation to put together a new faction.

I happened to see some really lovely white coverall-clad plastic Tech gang conversions by sump dweller over at Yaktribe and liked the stark monochrome scheme so much, I decided to paint up some classic Techs in a similar fashion.

Attendance at the event requires a 1,250 cred gang built using one of the published gangs in the Gang War books or the Gangs of Legend list. House Van Saar is thematically the obvious choice for a Tech gang, and as the House list hasn't yet been published, I'll be using the Gangs of Legend list. I pulled together my favourite Techs and made a preliminary shooty-style list with boltguns, plasma guns, lasguns and a grenade launcher. I also added in a pair of close combat fighters just in case!

After some initial assembly and converting work, the gang looked something like this: 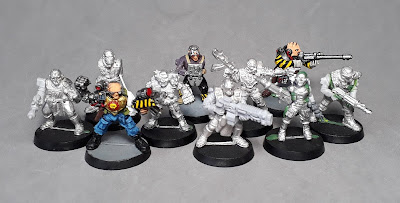 There's a nice mix of Tech gangers, including the Jes Goodwin Leader, some of the nice Mark Copplestone and Roy Eastland gangers, as well as a Marauder miniatures Tech (I think by Aly Morrison). Several figures were destined to be stripped at this point, and I was still planning weapons load-out and arm donors!

The first two figures to get painted are the pair of lasgun gangers - Celerity and Sinclair.

I knew that I wanted at least one female Tech. After rooting around in my boxes I settled on using the old Citadel Venus Bluegenes figure from their 2000AD range in the mid-1980s (If you think this sounds familiar, that's because I've already used a Venus Bluegenes for Kitty Hawke, plucky pilot!).

Venus had a lot of potential as a Tech - her combat trousers were similar to the Tech's work trousers. She also had a primarily bald head with a Mohican which could be clipped away.

I kept the paint scheme pretty monochromatic with the white workwear and black boots and belts. The only real concession to colour are the little flashes of orange and blue.

In the end, I did quite a lot of adaptation, including the removal of both arms, the addition of a new gun, sculpting the right arm and adding a servo arm. I also altered the shape of her head (which was quite flat) and added some techy gear. 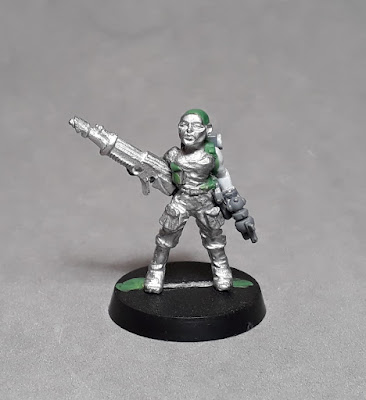 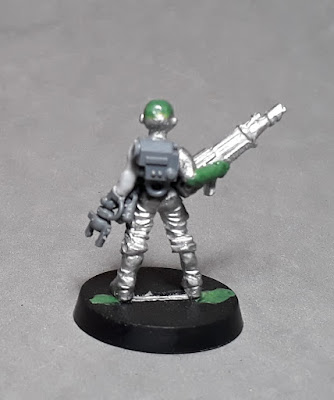 Celerity came together with the paint job I think - it helped to conceal all the transitions which I was worried about before I painted her.

Sinclair was a simpler model than Celerity, with only a little modification needed. He's a standard Copplestone Tech with standard plastic Rogue Trader Imperial Guard etc. arms. I did have to carve down the arms to get a closer fit to his body. I also sculpted a new trigger finger and resculpted the fingers of his supporting hand. 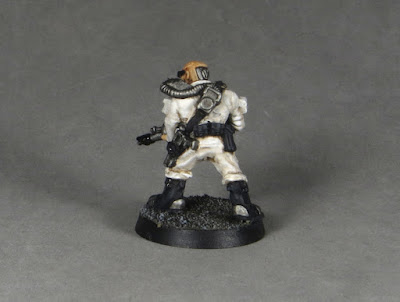 So that's two out of ten gangers painted. I'm hoping to get another pair painted this week to swell the ranks! 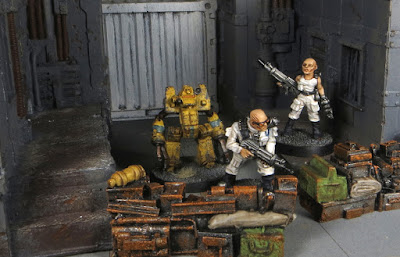