I put some energy in yesterday evening to finish off another pair of Tech gangers for the gang I'll be using at the Necromunda event next month.


This time I've painted two one-piece 'stock' models without any modification of any kind - a characterful Marauder Tech, and the Copplestone Tech leader.


In my gang, the Copplestone leader will simply be a ganger armed with a boltgun. I plan to use the more showy Jes Goodwin Tech Baron as my leader.

Ganger Gould is clearly higher ranking than the two previous gangers, Celerity or Sinclair. He has a rather ornate breastplate, a decorative puff and slash right sleeve, and what looks to be a pretty swanky bionic arm! 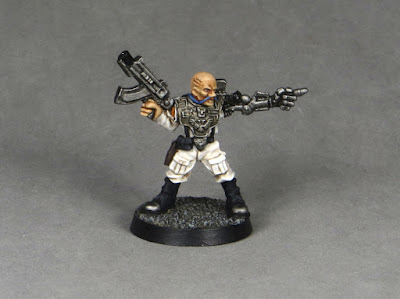 Gould got the same paint treatment as the other gangers to date, with the exception of his breastplate which got a sepia wash as well as the black wash to suggest a higher value metal.

Although I've had this figure awaiting some attention for some years, I'd never really scrutinised the rear - discovering the little spanner and the slashed shoulder were pleasant surprises.


The second figure is ganger Vigor. In game terms, Vigor is armed with a grenade launcher - after all, what else could his little shoulder-mounted missile pod be? Stylistically, the Marauder Confrontation figures tend to more exaggerated details. In fact they tend to more details full stop! Vigor not only has his little missile pod, but he has some three control panels, a targeting array, a huge bionic hand and ten pouches around his waist. Not to mention the fancy epaulettes! 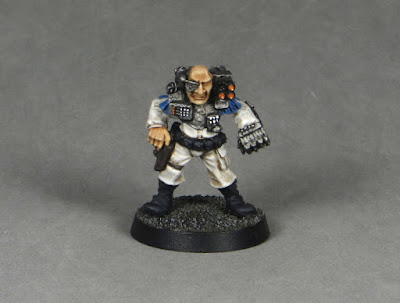 Although he may be chunkier than the Copplestone gangers, I think with a matching paint scheme he fits in just fine. 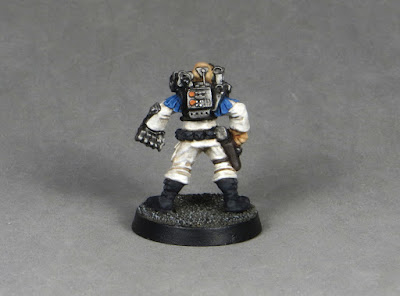 The four gangers to date marry together quite nicely I think. I'm also pretty pleased with the fact that the simple paint scheme lends itself to pretty fast painting output.


I'm still waiting on a couple of parts needed to complete the final two gangers, but next up should be a champion and possibly the Tech Baron himself.