Of Plasma Pistols and Shotguns

My gaming group's Necromunda campaign is in the final phases, with 4 weeks left to go. The Skallytong Boys of House Morlaque are languishing mid-table, so with a money belt full of cash, my Leader decided to go on a recruitment drive.

I've added a brand new champion to the gang, as well as another supporting ganger with a shotgun.

Tortega comes into give a bit of close-quarter support (an area where the Skallytong Boys are a bit light. He's equipped with a plasma pistol and "power weapon" (this will become a servo-claw in future iterations of the game when the full Trading Post is published).

Tortega is built from a Confrontation Hunter ganger, with a head swap from a different ganger, and the servo claw from the female Bob Olley servitor (the torso of which was donated for a different project many moons ago!). Tortega's plasma pistol is from the Forgeworld chaos renegades weapons pack. 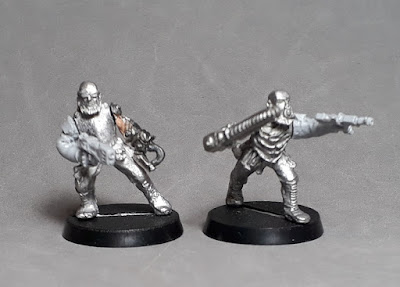 I kept the now well-established Morlaque colour scheme for Tortega - in the most part his equipment makes him stand out. I did add a little touch of decoration with his rather fancy polka dot shirt sleeve. 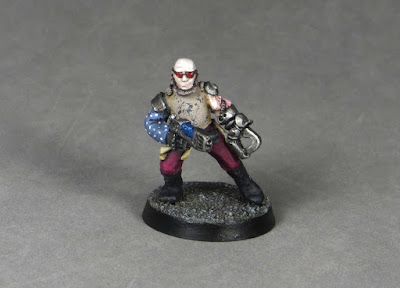 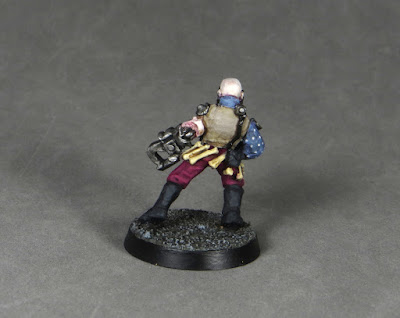 Just in case you were wondering about his donor head, here's the four figures I converted from two Hunter ganger variants. You can see that simple head swaps and different arms have helped to really change the look. 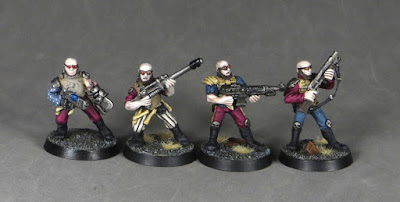 Skull Cap Jak is ironically my least favourite of the Hunter models. He was clearly intended to be the gang Leader, but his bone armour is a bit over the top, especially his skull shaped helmet. He's also a bit short and bandy-legged compared to the other gangers. Nonetheless, I had to include him in my gang. So he's in as an over-enthusiastic ganger (the one who always takes things one step too far). 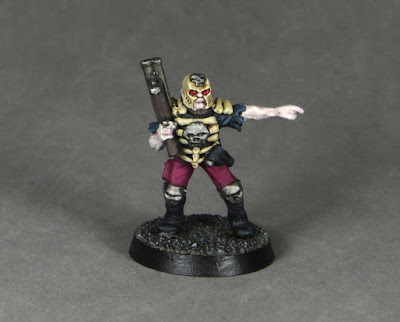 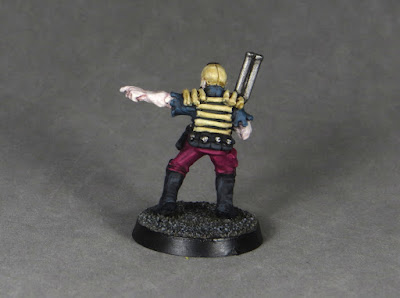 Finally, for reference, here's all 4 of the Confrontation Hunters together - it's not too often you see them all painted in a group. 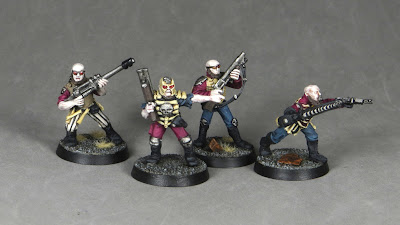 Hopefully the new recruits won't do the usual trick of dying in a spectacularly unsuccessful fashion!
Posted by axiom at 14:49