The release of the new incarnation of Necromunda has got me all excited. Not least because the background in the rulebook feels like a director's cut of all of the great content from Confrontation, married with that of mid-1990s Necromunda. There are great swathes of text from the Confrontation-era White Dwarfs lovingly reproduced and spliced with later canon. We now see again that Necromunda is a planet, with different locations and shifting political power, rather than the trials of a few gangs within a single hive spire.

I confess too, that I'm pretty pleased with the rules tweaks which have taken away some of the tiresome elements from the mid-1990s incarnation, and added in modern gaming approaches.

I'm not the only one who's excited about the new game. My gaming group is due to start a new Necromunda campaign in the New Year - we already have nearly 20 folks signed up, which demonstrates quite how excited people are. In preparation for the new campaign, I've made a start on a new gang. I say new gang, but typically it's an old gang - this time I'm working on the Hunter gang from Confrontation.

If you're not familiar with the Hunters, they were a set of 4 models from Citadel's short-lived Hive Gangs release which was designed to support the Confrontation rules.

The Hunters comprise 3 gangers (requiring plastic arms and weapons) and a single-piece leader. Asslessman over at Leadplague has done a nice evidence-based summary of the design of the Hunters from the Confrontation White Dwarfs. Check it out. I'll just reiterate the assertion that the Hunters are a middle-class Hive Gang who use bones as trophies.

The models themselves are a weird combination of Voodoo Amish, complete with lots of bones and chinbeards. There's also a familial relationship to the later Necromunda House Delaque figures, with the bald heads and goggles and glasses.

I've imagined that the Hunters are part of House Morlaque - a subservient House to House Delaque - not powerful or strong enough to rank as one of the six major Houses (yet).

The Skallytong Boys of House Morlaque are notorious among the mid-level citizens of Acropolis Hive. House Morlaque are lackeys to House Delaque - in the view of many Delaques, Morlaques are inclined to over-ostentation and brashness. They lack many of the furtive skills that are so highly prized by House Delaque, but what they lack in subtlety, they make up in other ways. The Skallytong Boys have developed an approach to gang warfare that they describe as 'hoodoo'. They will snatch sleeping rivals from their cribs and replace them with a grisly warning made of skulls. They wear the ribcages and femurs of enemies despatched in a gunfight. They hunt down lone civilians in extended chases through the Underhive, never revealing themselves, but pointing the way with macabre signposts fabricated from human finger bones. Many a powerful member of House Delaque has sought to use the Skallytong Boys as terror troops, while the Delaques themselves carry out more secretive work.


The gang will be assembled from classic Hunter figures, with converted additions. Here's a selection of the figures I've been working on:

The first two additions to the Skallytong Boys are ganger Braxton and juve Amon. Braxton is one of the original Hunters with a head swap. His arms are from the plastic bare arms sprue which accompanied the hive gangers, with sculpted sleeves. His gun is a metal Rogue Trader autogun, and I've given him a ribcage shoulder pad and a couple of bones dangling from his belt (both of these are from the Toad King Castings skull and bones sheet kindly donated to the cause by cheetor). 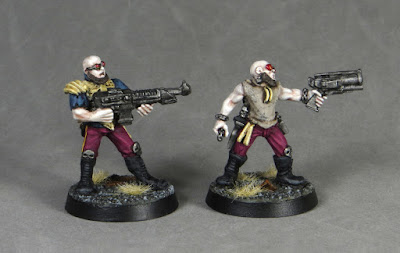 Amon is a conversion from a Gorkamorka Digga (also donated by cheetor!). 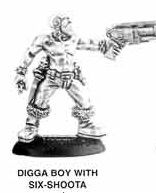 I trimmed down the fur around his boots and sculpted the knee skull, jerkin, beard and goggles. He also got some bones from the Toad King Castings bone sheet. 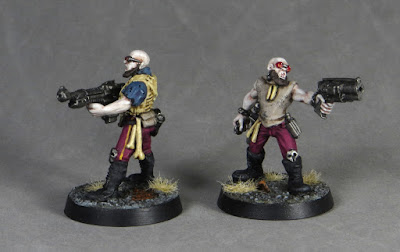 I wanted these guys to have a darkly sinister look, so went for a dark pinky purple as the primary colour, combined with pale skin and bone. 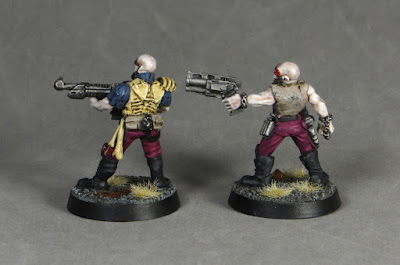 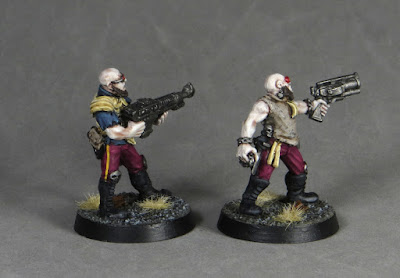 I'm pretty pleased how this pair turned out and I can't wait to make a start on the rest!
Posted by axiom at 15:00