My warband will be largely composed of figures from Citadel's Pan Tang range, with the addition of a couple of additional figures to represent my Wizard and Archers. I have decided to place the warband a few decades before the start of Elric's adventures in the Young Kingdoms. My Wizard is Soorkan ul-K'aarna, uncle to Theleb K'aarna who will become one of Elric's greatest enemies. For now, however, Soorkan is the powerful spellcaster of Pan Tang, while Theleb K'aarna is his apprentice.

My first completed figure is Soorkan ul-K'aarna. As Citadel's Pan Tang range only included one sorcerer (Theleb K'aarna himself), I have selected a suitable wizard - the Illusionist from Citadel's C02 range. 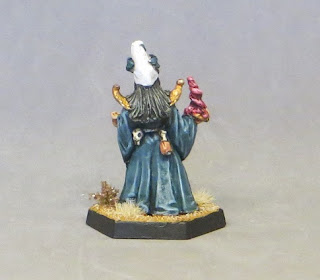 Soorkan has the right presence for a senior sorcerer of Pan Tang I think - exotic feathers and jewels, expansive stomach and a silly hat!

To start the wider warband, I also painted up a pair of soliders - an Archer and a Thug (or possibly Man-at-Arms). 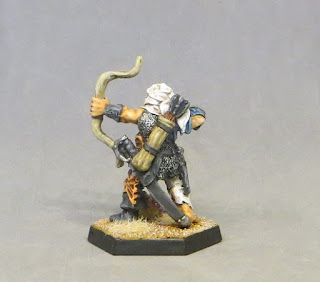 The Archer is a Citadel Chaos Thug, as there aren't any models of Pan Tangians with bows. With his head wrapping and recurved bow, I figured there were enough design cues to let him rub shoulders happily with the rest of the warband. 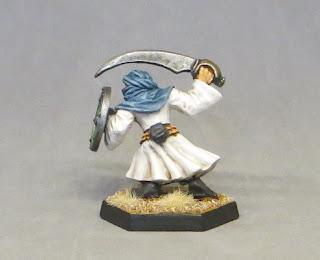 Dharmit is actually the first figure actually from the Pan Tangian range, and pretty much the most 'nomad'-like, with his robes, scimitar and headscarf. Most of the rest of the range sport helmets and weapons of different styles. 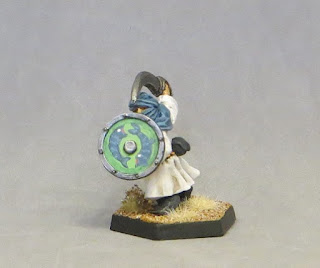 Given that Pan Tang is an island, I wanted to give Dharmit's shield a sea-faring/nautical feel, so he got a pair of fish chasing each other's tails.

Here's the warband to date:


Over the next couple of months I'll be painting up the rest of the warband, interspersed by other projects, so watch this space for more Pan Tangians in the near future!
Posted by axiom at 11:57