In between Christmas prep and keeping the kids amused, I stole a few hours yesterday to make a start on a bit of a slow burn project - making a crawler vehicle for my Ash Wastes Nomads. For a long time now I've been wanting to use a vehicle along the lines of the crawlers shown on p109 of the Rogue Trader rulebook.


Ideally I wanted something large and slab sided, either tracked on with big balloon tyres. There's quite a few options in the small vehicle / APC size (Daemonscape stocks a dozen or so with the right kind of look alone), but they're all a bit on the small side.

In the end, I did what any discerning hobbyist of the 1980s would have done. I bought a toy. What I bought was one of these - an Action Force Red Shadows Hyena tank. 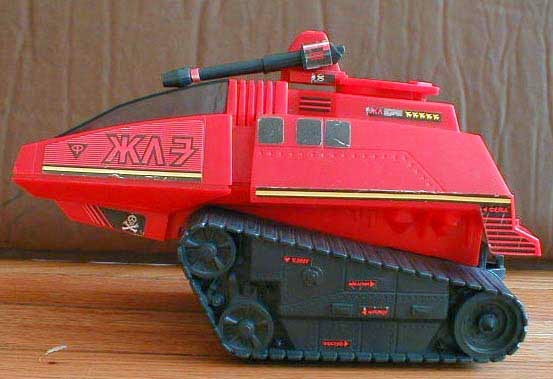 Action Force was the European equivalent of GI Joe. In the early 1980s, it was a distinct line, which later became amalgamated. The Hyena tank morphed into the GI Joe Cobra HISS tank. I picked up my Hyena tank for just £6 on eBay (missing the turret guns). Importantly, it has just the bulk and size I was looking for.

After removing the stickers, turret and the clear plastic canopy, I set about adding a range of parts from my bits box. The sides got a couple of vents, while I cut a plate for the roof of the main compartment to cover the turret hole. 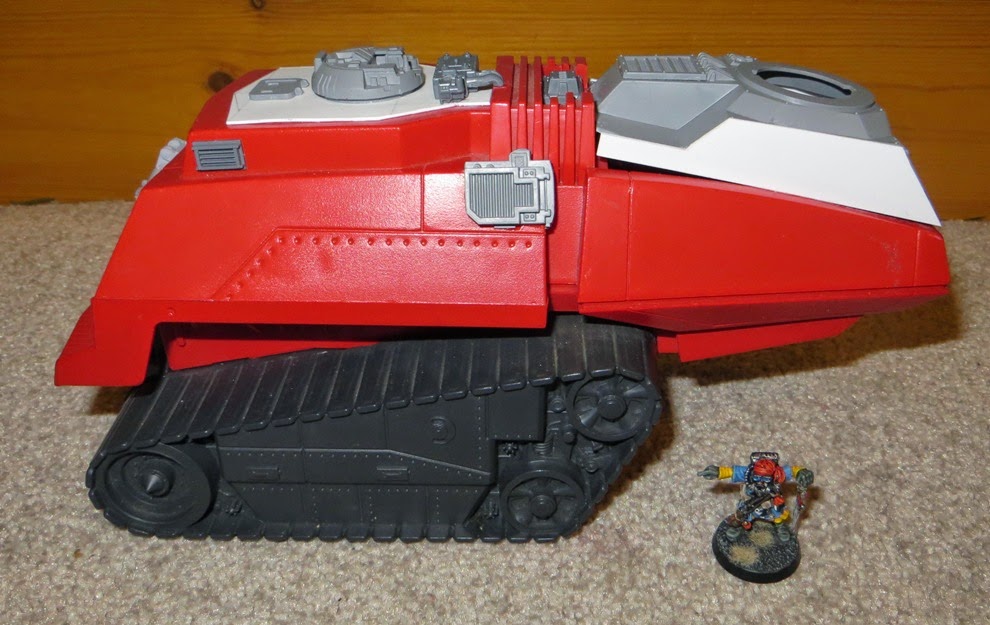 You can see above, I've made a start on changing the profile of the cockpit / driver area, using the upper hull from an Imperial Guard Leman Russ tank. The hole for the turret will be covered by a large round hatch which will be able to be opened or closed, allowing a model to be placed there. The sides of the cockpit are plasticard, cut to follow the Leman Russ hull. I'm planning on adding another strip of trim where it meets the Hyena tank.﻿ 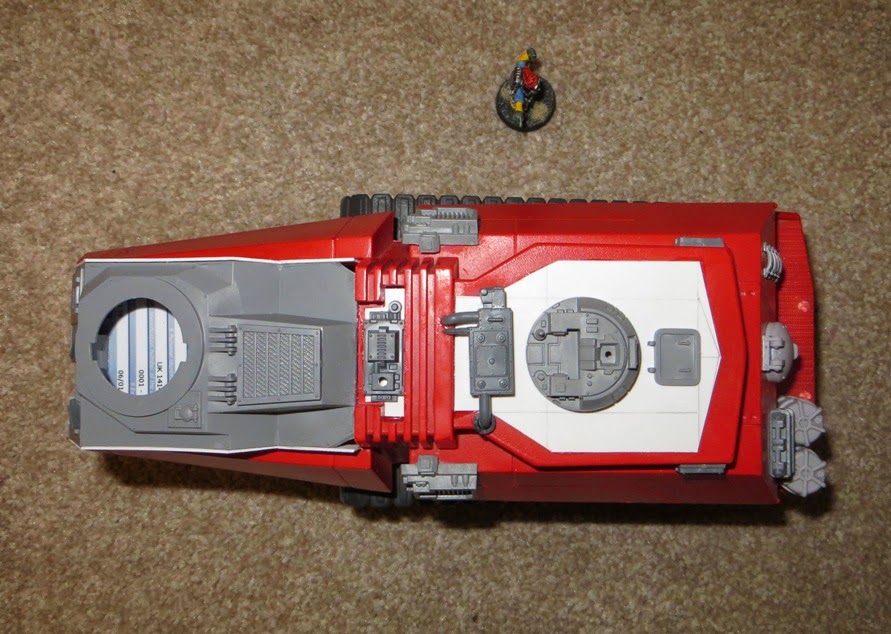 The roof of the main body got some more details; just behind the cockpit is a comms array (aerial to be added), then a tech bit of some kind, followed by a turret from a Space Marine Whirlwind. Finally a small hatch from an Imperial Guard tank. 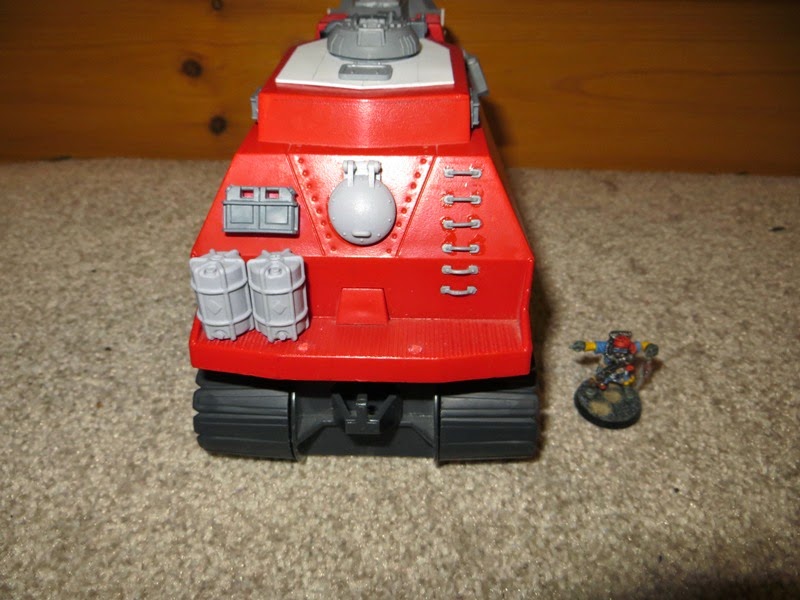 The rear of the crawler was largely devoid of details. In order to reinforce the scale, I've added the small round hatch (Zinge Industries) and some barrels (again Zinge) and fuel cannisters (Imperial Guard tank). The rungs up the rear were really important to help with the scale - I still need to source a suitable ladder to hang down to ground level. 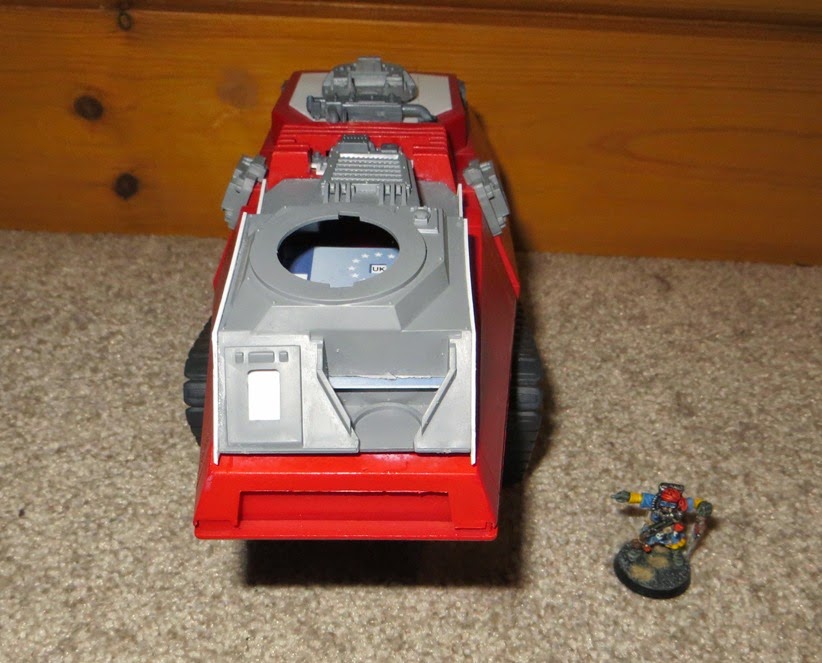 Still plenty of work to do at the front. I'm debating what to do with the void from the missing Leman Russ hull gun - ideally it will become the driver position. 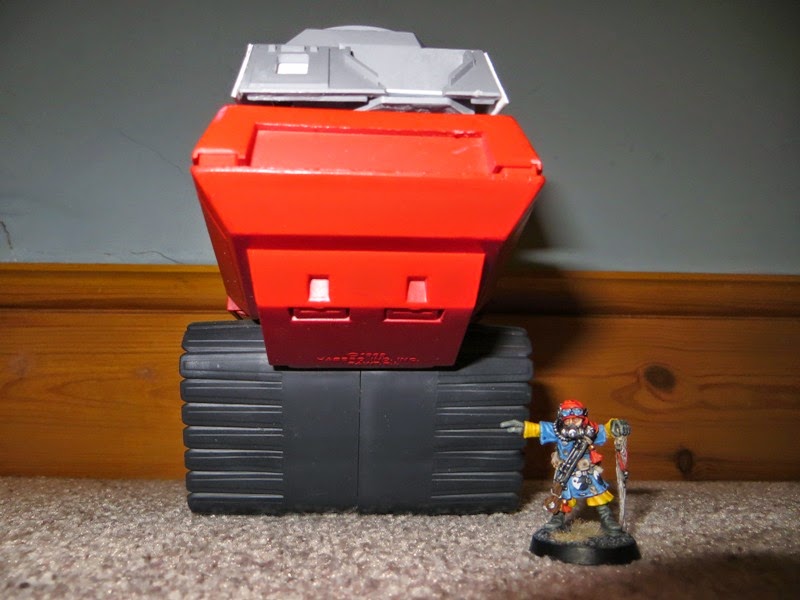 Finally, a ground level shot. Unfortunately it shows off the worst part of the tank, where the tracks simply merge into the lower hull. Part of this will be resolved by some painting trickery, but I also plan to add another access hatch to try and hide the big blank space.
Don't expect this project to be completed any time soon!
﻿
Posted by axiom at 22:42