Back at the end of December 2013, I reviewed my hobby output for the year and made plans for 2014. 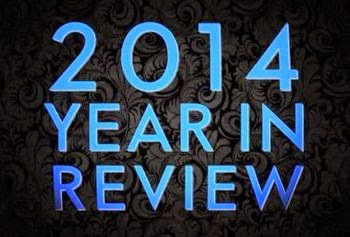 As we've reached the same point in 2014, it's high time I had a look at this year, what I've achieved, and started thinking about what I want to do in 2015.


On balance, I think 2014 was a pretty good year hobby-wise. In fact, I might venture the thought that I have done more hobby related stuff this year than at any other point since I first discovered miniatures. Not only have I painted more models and played more games, I've also enjoyed doing it more than I can remember for years!

At the end of 2013, I set myself some targets relating to collecting, painting and gaming; so how did I fare in 2014?

My collecting bug was well and truly sated earlier this year, as by the middle of 2014 I had managed to source a complete collection of Citadel's Eternal Champions range, including a lovely pair of unreleased Pain Tangian tiger handlers. Admittedly, none of the models are yet painted, but they're all safely stored in a case as a future project to address.

2015 Target: I have no particular ambitions to collect a new range in 2015. Instead I will aim to bulk out my figure collection for use in RT/Confrontation, including some civilian types.

Painting
Target: Paint at least 25 models (I painted 26 in 2013), including 12 Brat gangers, my Bee Knight and completing my Dark Elf Blood Bowl team. I also wanted to participate in at least 3 community and/or charity projects.

Status: Not only did I exceed my 25-model target, I more than doubled it, with a final total of 61 models painted! I completed my Dark Elf Blood Bowl team and used it at both a tournament and in a league, and did indeed take part in several community / charity projects. I painted up an Elf for the Oldhammer Legacy Warband, a Pestigor for the Talk Fantasy Football Legacy Team, and a Halfling Chef and cooking fire for the Thrudbowl annual charity fundraiser in aid of the Roy Castle Lung Cancer foundation. I also ran my own little blogiversary celebration and modelled and painted a Brat ganger as directed for lasgunpacker for his own collection. My own mutated minotaur, Bro'og, was made as part of the paint along Bestiary of the Exalted and the Unfortunate project, initiated by Plaiecivile, while Aigulf came out of the Oldhammer Salvation Army (brainchild of Asslessman).

Some of my planned models didn't end up gettng painted; I only got round to painting 4 of my planned 12 Brat gangers (plus vehicles). The poor old Bee Knight went the whole year without seeing a further lick of paint! On the plus side, I started a whole host of projects and new models, including (but not liited to): a Guilder and his retinue of hangers-on; a selection of Ash Waste Nomads; a round dozen Blood Bowl Snotlings; an Inquisitor and a small retinue. I even painted a crane!


Target for 2015: If 2014 is any indicator, about a third of what I think I'll paint now will drop by the wayside. I also question whether I can paint as many figures next year - I already know that changing family routine is likely to reduce my opportunities to paint by around a third. Nevertheless, I think I'll be aiming to finish around 40 figures. As for what those figures might be, I've got a whole host of potentials, including RT/Confrontation civilians, more hive gangers, nomads and Brats. There's Arbites, astropaths, traders and genestealer and chaos cultists. Needless to say, it will be varied and interesting!

Gaming
Target: In 2013 I managed 13 Blood Bowl matches and a single game of 40k. My ambition was to match that in 2014, driven in part by attending the NAF Championship 2014 (Blood Bowl) and Bring Out Your Lead 2014 at Wargames Foundry.

Status: Achieved. I actually managed (I think) 33 games this year - BOYL'14 and NAFC'14 provided me with 8 of these. I also joined the Nottingham Blood Bowl League (NBBL) and over 2 seasons managed a further 17 games. I also had a number of irregular pick up games of various things with a couple of gaming friends - all were great fun.


Target for 2015: Quality, rather than quantity is my ambition for 2015. More of the same as this year please - BOYL'15, more Blood Bowl league games and some opportunities to push a few models around a table - whatever they may be and whatever game looks appealling!

Summary
2014 has been a good year for me. I've enjoyed sharing what I've been up to on this blog, and I'm constantly finding inspiration and motivation in the stuff that other folks are up to. I probably also ought to mention Project Alchemy which took place over the course of the Autumn - not for any kudos from running the thing, but because through the generous donations, we managed to raise £2,240 in aid of the children's charity, UNICEF. If that's not a testament to the ethos and spirit I've found in the wargaming community this year, I don't know what is.

Email ThisBlogThis!Share to TwitterShare to FacebookShare to Pinterest
Labels: Oldhammer