I've decided that my Brat gang needs some more opposition. Eventually I will finish off the Guilder gang, and have scavvies and techs waiting in the wings, but Ash Waste Nomads really caught my eye. Over the last couple of months I have acquired the classic Citadel and Marauder nomads from the early 1990s and want my gang to have that look: goggles, respirators, layered clothing and (most importantly) broad-brimmed hats!

Converting a Nomad
Often I plan conversions for some time without doing anything with them, and the first nomad model was no exception. I'd come up with the concept months ago, but Chico's Conversions Challenge Week provided me with the motivation to build and paint the nomad in a record two evenings.

My starting point was Darvin from the old Warhammer Dogs of War range. You can start to see he's got some of the elements that fit the nomad look - broad-brimmed hat, layered clothing, pouches and canteens.
﻿
The conversion itself was fairly involved. I started off by removing the bundle of arrows slung across his chest, as well as his bow and feet. The new boots came from a plastic Heroquest henchman, while Darvin also picked up a plastic Eldar lasgun, Kroot shoulder pad, knife and gasmask from Victoria Miniatures. He also had a small resin backpack added to the rear - I'm not sure of the origins, but it might be from Forgeworld.


After all the assembly was completed, I starting doing some greenstuff repairs and sculpting of new elements. The section at the bottom of his tunic was to cover up the chainmail that Darvin was wearing. He also got new boot tops, a new belt buckle and a new left hand to hold the lasgun.

Midway through painting up the nomad, I decided the tight leggings weren't working for me. So I sculpted a new pair of baggy MC Hammer pants (over some beautifully painted red leggings sadly).


I'm glad I took the decision to make the change, as it takes the model even further from the original, and also ties him in better with the Citadel and Marauder nomad figures.

Painting the Ash Wastes Look
I spent a long time considering what colour scheme to go with on the nomads. As the end of the day I took my cue from two sources. The first was to go with bright vibrant colours, because "the ash wastes are a striking and colourful, if somewhat lurid environment...the creatures and nomads that live there are equally colourful, the better to blend into their surroundings." (White Dwarf 130).

As a counterpoint, there is a contradictory note against John Blanche's nomad concept sketches in White Dwarf 131, which says the nomads wear "light neutral colours, offset by bright geometric colours." But I'm going with the first text.

The second source was to draw on the Mongolian nomad colour palette for clothing - grey/blue and deep red with flashes of yellow and orange. Here's the result: 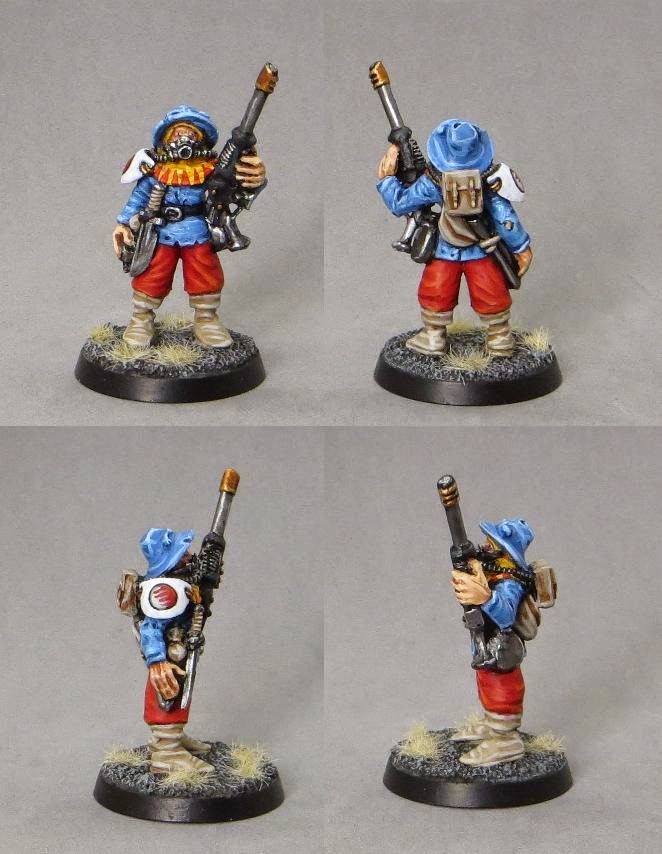 The use of dags on the headscarf come directly from John Blanche's concept sketches, as does the symbol on the shoulder pad ("representing the shifting ash dunes & clouds").


Along with the 5 original Citadel and Marauder figures, I've got plans for several other conversions - watch this space!
Posted by axiom at 08:20