Back in December, I showed off the WIP conversion of my Blood Bowl mini-diorama I'll be entering into a 'Duel' modelling competition at the NAF Championship in Nottingham in May.

The project started off purely on the premise that I happened to have lots of spare Elf catchers kicking around, as well as a lonely Troll. These two chaps in fact:


I figured I ought to be able to do something interesting to enter for the duel by using these 2 likely chaps. My my original premise was that I could convert the troll to be holding the Elf in the air around the neck, throttling him.

Once I spent a bit of time looking at the models, I decided the 'throttling' pose was unworkable - the arms would obscure the troll's face, and the Elf's neck is far too small for one troll hand, let alone two!

Never-the-less, I ploughed on and cut off the Troll's left arm. I often find it helpful to cut apart some key pieces from my models to give me some components to physically move around and reposition, rather than rely on a mental image (note, this approach sometimes leads to limbs or heads being removed unecessarily!)

After chopping off the troll's left arm, I realised I could easily have it grasping the Elf around the waist, with the right arm drawn back ready for an almighty punch (or mighty blow if you prefer!). Like this:

Creating a similar pose was going to require some serious surgery to both models. The Troll was going to need his right arm removed along with his left, as well as his head. Goodness knows what I needed to do to the Elf, but initially I knew it would need cuts at his head, arms and probably legs. Of course, in addition to the deconstruction, the reassembly would need a significant amount of sculpting to conceal and repair all the damage.


Some major pinning, trimming, filing, bending, repositioning and sculpting later, this was the result. Note, there was a tiny amount of sculpting still needed around the join of the right arm to the shoulder pad: 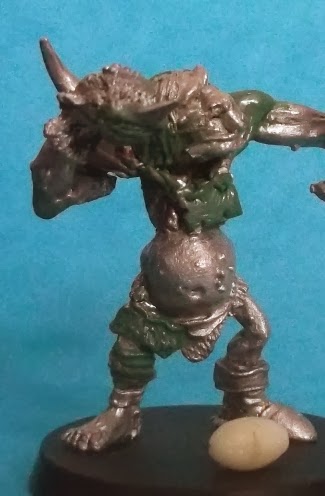 Front View - Troll
You can see on the front of the model I've replaced the left foot with an Ogre boot (I like asymmetrical gear on Blood Bowl players). I also needed to sculpt a new piece of his fur kilt and new bandages on his right leg to repair the damage from removing the right arm.

The fist got some new chainmail on the fingers, and I added a little armour plate around his neck to cover the damage from sawing off his head. The head itself had the left side cut away to allow me to reposition it at a different angle. Taking the easy option, I covered up all the cut marks, damaged ears and so onm with a new hair-do!

Finally, the left shoulder and right elbow were resculpted. 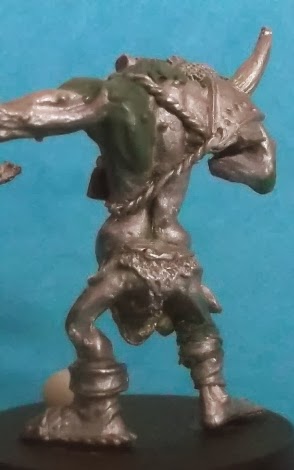 Rear View - Troll
Ironically, I think my best sculpting on this model is on the rear, where most people probably won't see it! I resculpted the shoulder muscles and shoulder blade, and I'm very proud of the results. I also added a couple of greenstuff pustules, using my newly learnt technique, to integrate the sculpted parts into the model. 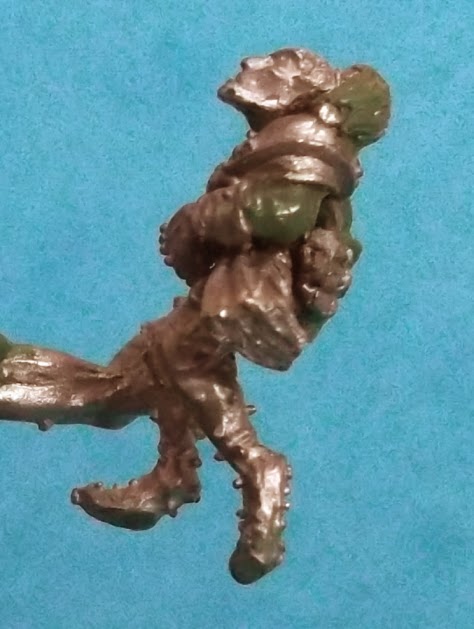 Left View - Elf
With the Elf the repositioning is all about telling the story - I wanted him to look like the Trolls hand is crushing him around his waist, and he's struggling to get free, while at the same time being in unbearable pain. Having cut off the legs, I repositioned them to be facing forward, and a little bit of greenstuff repaired the joins. The main sculpting on the left side was to sculpt a new elbow, having cut away the original, and to sculpt some new hair at the end of the pony-tail from the head repositioning.

You can see I positioned the head as if he's arching it back in pain; this necessitated the sculpting of a new neck. 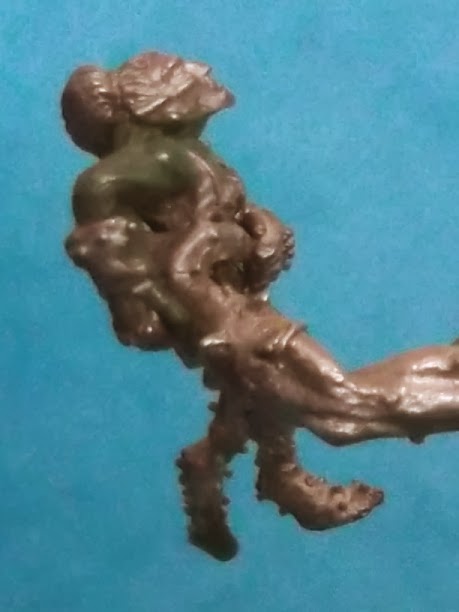 Right View - Elf
The only major sculpting on the right-hand side, was to sculpt a brand new arm. Originally I'd planned to have the right arm waving around in the air, but after playing with the components, I liked the idea of having the Elf holding onto the Troll's hand and trying to prise it loose.

The new arm was sculpted over a small armature (i.e. a bent piece of paperclip!), which I pinned between the Elf's torso and glove. In an ideal world, I'd have made the arm a bit slimmer, but I don't think his steriod-enhanced muscles are too obvious!

The only other sculpting on the right side, was a new thumb (the old one had been damaged when I'd cut away the glove from the torso.


That's all for now; the figures are currently being painted, and hopefully in a week or so I'll be able to share some pics of the finished diorama!