I'll start this post off with a caveat. I'm not an experienced RPG player - in fact it's been 10 years since my last Dungeon crawl, and I think I've undertaken fewer than 10 quests ever.

So why, you may ask, am I writing a post about the Stormbringer RPG, based on Michael Moorcock's 'Elric' novels, jointly published in 1987 by Games Workshop and Chaosium Inc.?

The simple answer is that during my search for Citadel's Eternal Champions figures, I discovered that GW and Chaosium had published the RPG, and it sparked my curiosity. I shelled out the princely sum of £9, and in due course had (yet another) old school gaming rulebook to avidly pore over.
I hope (eventually) to use some of the source material when I develop some narrative-driven skirmish games for all of the lovely Citadel figures I'm stockpiling. However today's post is simply just to give a very light review of the book and its contents (second caveat; as an inexpert RPG player, I have no idea whether the rules system is good, bad or indifferent, so I'll just concentrate on the pretty pictures and background!).
My hardback copy of the book is in fair condition, most importantly with all the internal pages being undamaged. I think it's fair to say that the book follows most of the conventions of an RPG rulebook, covering the setting (geography, peoples, history & beliefts), character generation, the actual rules bits (movement, fighting, skills, magic), a bestiary and finally a couple of example scenarios.﻿

The introduction to the book has a nice commentary on Moorcock's Elric, and his characterisation as a fantasy anti-hero (chaos-worshipping, weakling Emperor who gives up his throne and destroys his own race), plus a useful overview of Elric's saga and the main protagonists. Each kingdom mentioned in the saga is given a short piece of text, ensuring there is enough material for a GM to develop quests in any given location.

The book is filled with artwork typical of the time; some is fantastic, some is rather crude. It is interesting to see that many GW artists of the time were involved in the internal illustration, including Tony Ackland, John Blanche and Pete Knifton.


The bestiary in particular is stuffed with illustrations of the fantastical beasts of the Young Kingdoms:


The second half of the book is devoted to scenarios; The Tower of Yrkath Florn is a simple introductory scenario, complete with detailed step-by-steps for a novice GM.


Following on, there are detailed profiles of the key characters from Moorcock's novels and more detailed scenarios, including the Sea Battle at Melnibone and Karyzoon's Quest: 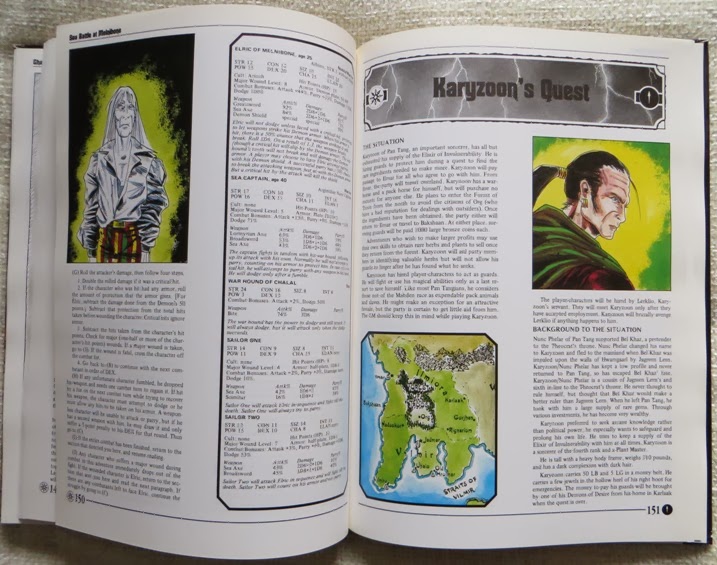 Stormbringer should be a useful resource for developing my skirmish games; many of the ideas and much of the background will be invaluable, being a useful distillation of the rather unwieldy amount of material from the novels. I'm also a sucker for any sort of old-school artwork and background, which the book has in spades!

Chaosium published several editions of Stormbringer, as well as numerous supplements between 1981 and 2001.
Posted by axiom at 10:20