This is a bit of a sneak preview of something I'm working on alongside my Dark Elf Blood Bowl team for the NAF Championship 2014.

Historically there has been a Best Painted Team competition as well as prizes for tournament play. This year there is an additional mini diorama 'Duel' category, which unlike the Best Painted Team, is a stand alone competition. The rules are simple:

Two single models mounted on a single 40mm or 50mm Slottabase. The judges will be looking for a dynamic pairing of two well-matched opponents in some kind of dramatic situation occuring as part of a Blood Bowl match.


Precisely the sort of model I was talking about when I mentioned micro-ramas last month! I figure that I should at least be able to make something interesting given all the practice I've had! So this is what I've produced to date: 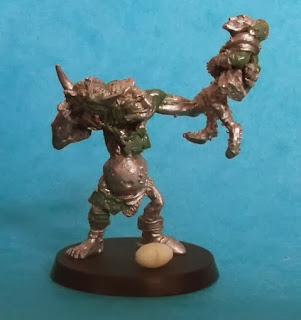 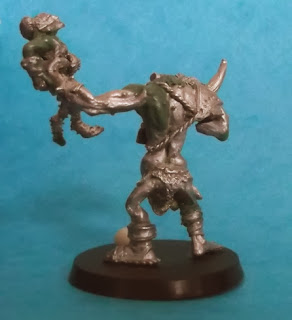 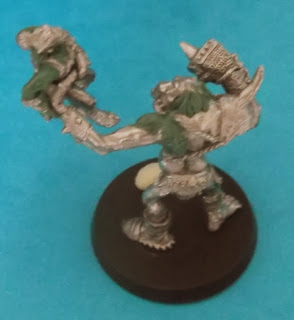 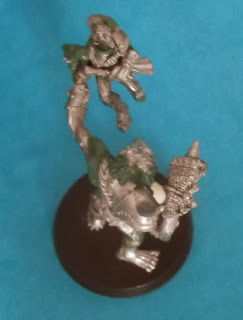 I realise the photos aren't the greatest (my decent camera has died and winter days don't give the best light!), but you should get the idea. The figures are a 2nd edition Blood Bowl Ogre with repositioned head, arms and legs. The rather unhappy looking Elf is one of Jes Goodwin's 2nd edition Elf Catchers with repositioned arms, legs and head. Hopefully it makes for a pretty interesting scene, while also meeting the brief.

Rather irritatingly, after getting to this point, someone mentioned the Heresy Deathball Boris in a similar pose. All I can say is that I came up with the idea completely independantly - originally my Troll was going to have both hands round the Elf's neck, but that was a much more complex conversion!