Last month I announced my belated discovery of Citadel's Eternal Champions range. Like a true miniatures collector, it took very little time to work through the collecting process, which is something like this:


You'll be happy to hear I'm now at Stage 6! I've decided I want the entire Citadel Eternal Champions range and create some nice small warbands for skirmishing with. Melniboneans are proving pretty straightforward to gather together, mainly because of their long running production and recycling into the High Ef ranges. Pan Tangians on the other hand are rather elusive - I haven't yet picked up any of the Pan Tangian Infantry:

I've had better luck with some of the other series however. My EC01 Melnibonean Infantry is looking pretty healthy, with 3 swordsmen and two bowmen still needed.

EC06 Melnibonean Cavalry are a bit sparser - I still need to the two axe wielding chaps, and of course, mounted Elric himself. 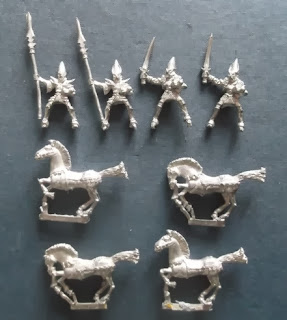 ﻿ I was also lucky enough to pick up a set of Pan Tangian tigers and one of the handlers for £12 last week. Significantly cheaper than the optimistically priced £85 set.

By the way, I wasn't kidding last time about Rodney Matthews original Moorcock cover paintings. 'Tanelorn' will set you back nearly £100,000.


Finally, it looks like the project to realise Granbretan figures from the Hawkmoon series is finally back on track. Eureka Miniatures have the licence to produce them and the sculptor they've engaged has just started posting some early images on his blog: 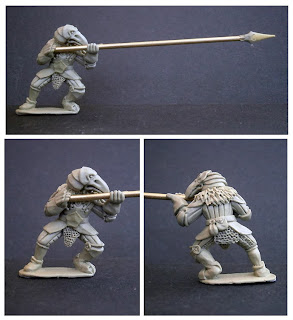 They look a little like their limbs are slightly out of proportion, but the overall design is pretty nice, and they should make a nice third faction should they see release.
Posted by axiom at 15:01