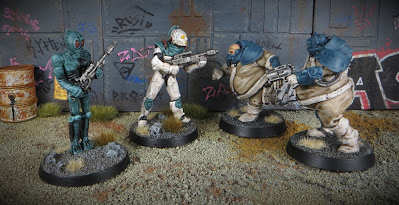 I was 100% certain that I wanted to include a robot in my Five Parsecs crew. The crew build system allows you to include up to 1 bot, so I rooted around in my boxes and turned up the fabulous Spacefarers S42 security robot.

The 25mm Spacefarers range was produced by Citadel in the early 1980s before the switch to 28mm that came with the publication of Rogue Trader in 1987. Most of the robots are wildly out of scale, coming in at around 42-45mm or even 54mm in the case of the giant robot sentinel. 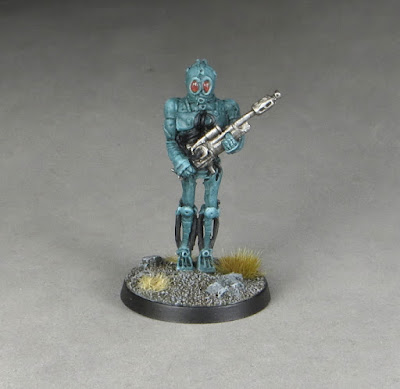 The figure has an integral base, but I just mounted it on a 30mm round base and puttied around to conceal it. A-D0M was painted in a fairly retro sci-fi colour scheme (I was thinking of 2-1B - the Star Wars medical droid). 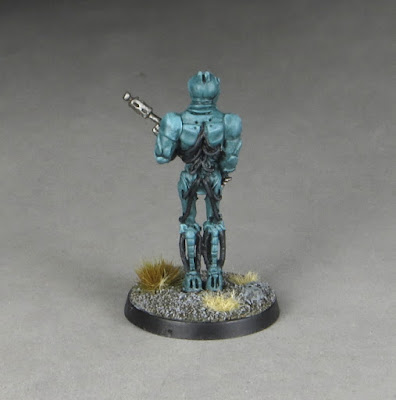 The paint job was super quick - washes over a base coat then several drybrushed highlights. The eye lenses were only area that really got any attention.

If you're going to paint one 42mm scale retro robot figure, then why not paint two! The battle droid is also from the Spacefarers range. I really love the art deco vibe of the figure with its serene face and lovely elegant head crest. 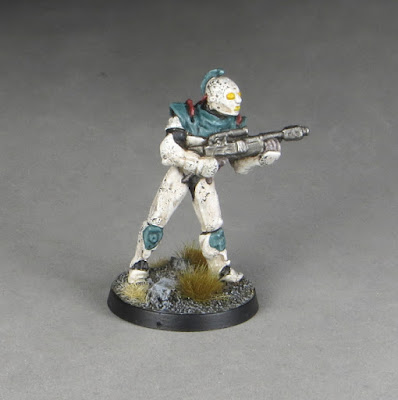 I switched up the paint scheme (you'll see this white and blue-green replicated on future figures). The biggest hassle was repairing a bit of damage on the right hand which needed three new fingers and the lower part of the hand and wrist resculpting. Hopefully it's not noticable! 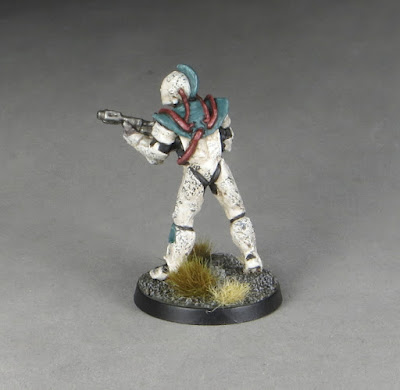 The fun part of painting these larger scale figures was that I started wondering about some 42mm skirmish games. Rooting around in my collection revealed I have at least a dozen other figures that could work in 42mm (just take a look at the first pic in this post) - something to think about in future!
Posted by axiom at 11:55