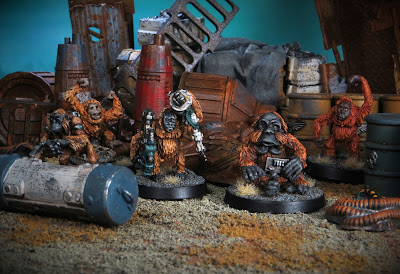 A few weeks ago my good friend cheetor mentioned the Modiphius Five Parsecs from Home rules as something we ought to explore for future gaming sessions. The game requires a 6-strong starship crew for narrative solo or co-op skirmish gaming. The crew is mainly humans but with the option to sprinkle in some robots and aliens. Over the next few days my response was pretty much as follows:

Over the next few posts I'm aiming to cover the building and painting of the Parsecs crew, Stargrave crew and the linked sub-projects, probably with a wrap-up once I've finished everything.
I'm starting with my Jokaero crew member for no other reason than I got enthused about tech-savant space apes over the last week! 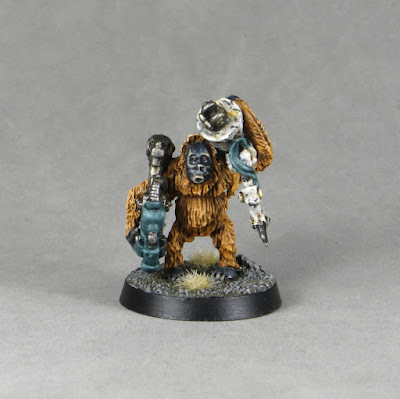 Oon-groo is a model I've been thinking about for several years. He is the limited release Citadel Rogue Trader jokaero that I have converted to carry some spare parts of tech. I always felt that the Rogue Trader jokaero was a missed opportunity in that it was simply an ape with no sci-fi references and no sense that this was a species which "given sufficient pieces of battered machinery...can make almost anything, from a spaceship to a las-cannon" (Rogue Trader).

To give the figure more of a sci-fi look, I grabbed some tech pieces from my bits box and fitted them to the existing pose: 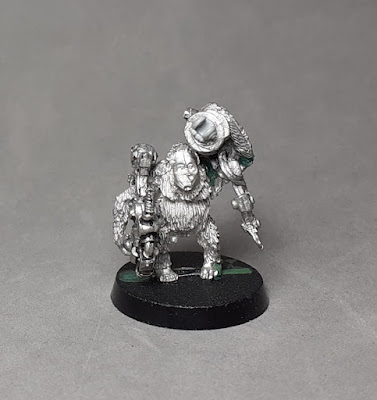 The paint job was pretty straightforward - an orange-brown for the fur and dark skin on the face, feet and hands. The battered white body of the robot and teal detailing pick up the colour palette I've used across the other crew members. 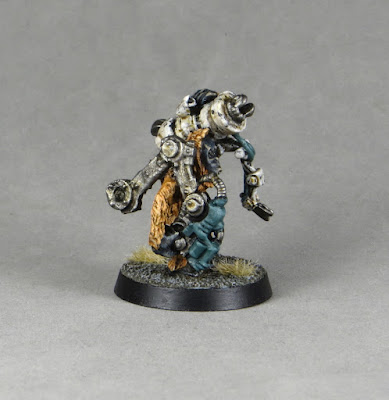 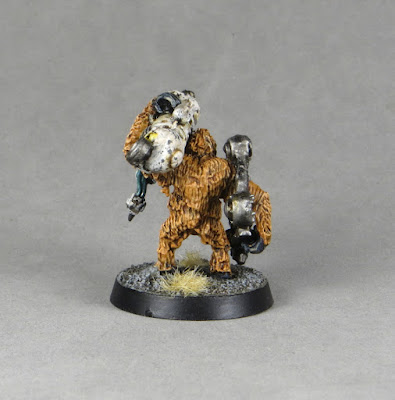 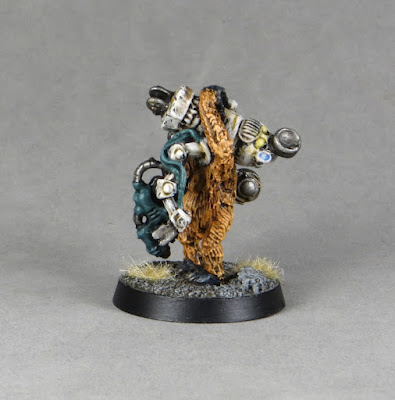 I dug out an unmodified Citadel Jokaero for the comparison photo below, and the logical train of thought was to consider adding a few others to make a small family group.
"Jokaero live in large family groups, roaming the galaxy at random, concentrating on survival" (Rogue Trader). In fact the number of jokaero in a family group dictated in Rogue Trader is between 4 and 21 (D4-1 (minimum 1) personalities plus 3D6 other jokaero). I had some suitable figures put aside for a jokaero family group, but decided that five was enough to start with!
My favourite addition to the group is the Blind Beggar Miniatures figure as the alpha jokaero in the family group. I added the little tech piece (from the Rogue Trader space marine RTB01 plastic kit) into his hand - fit perfectly! I'm not sure where the little guy came from - it is quite a crude sculpt, especially the ill-defined facial details. I mounted it on a random piece from a GW plastic vehicle kit to give a bit of additional height.

So that about wraps it up for this post - a fun, multi-functional alien figure for use in a range of skirmish wargames, plus a family group painted on his coat-tails!