Rogue Trader robots are such brilliantly fun models, with their eccentric configurations and wide variety of styles. The bubble-bodied Castellan with its 'Lost in Space' vibes is my favourite, and I've wanted to include one in my deep space salvage crew for a while. It matches the aesthetic of the LE01 power armour troopers brilliantly, with the rounded shapes and big 'R' (for robot?) that mimics the 'P' and 'A' on the troopers.

As the Stargrave bestiary necessitates a warbot (a large robot with multiple shooting attacks), I decided to kill two birds with one stone and paint up a RT robot for the salvage crew and act as a warbot should I roll one up on the Stargrave encounter chart.

Paint-wise, the Castellan was painted up in the same way as its crewmates. Somewhere in the process I made a slight error (I think I got the order of the washes back to front), so he's an ever so slightly brighter orange than the rest of the crew. I don't really think it matters though! 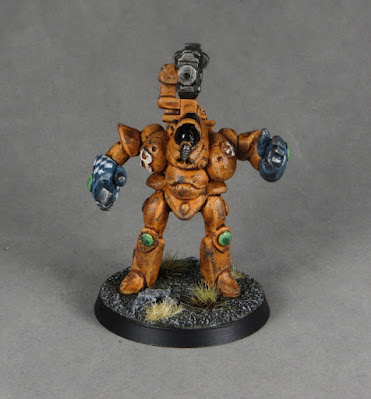 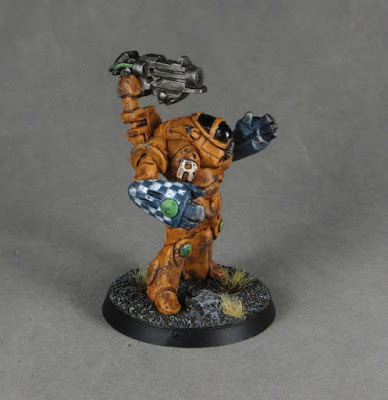 I wanted to add a little nod towards the fantastically patterned Rogue Trader robot colour schemes, so the Castellan got some nice blue and white checks on his right power glove. I didn't do it on the left one because a) RT schemes were full of asymmetry, and b) I really didn't want to go through the hassle a second time!! 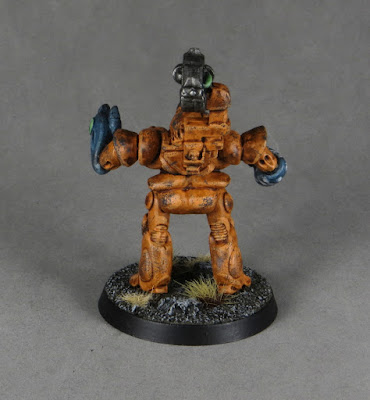 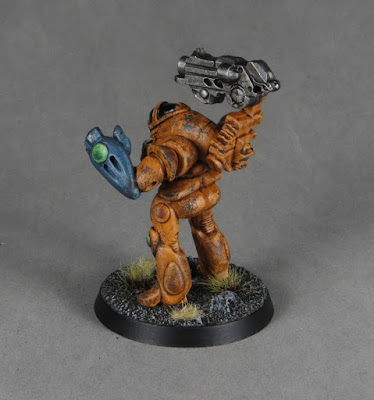 With a coat of gloss varnish on the black visor, the Castellan was ready to go!