Back in the early 2000s I started to get interested in revisiting some of the oddities and aliens from the 40k universe. I acquired Iron Claw space pirates and ambulls. I built a zoat army and gave one of my Eldar Warlocks a gyrinx companion. I also painted a piscean warrior in around 2004. Ten years later, I bought and painted a piscean warrior homage from the talented hands of then amateur sculptor Diego Serrate Pinilla through the now-defunct Oldhammer forums. At that point in 2014, I put my original RT piscean warrior in the stripping jar and boldly stated that I would paint it up in a "brand new matching paint scheme".

It is now 7 years later. Diego has since launched a pretty successful miniatures company, Knightmare Games, where you can still buy his fishman sculpt. And I have finally repainted my Rogue Trader piscean warrior!

As a quick reminder, the piscean warrior was one of the very first 40k releases, put up for sale in 1987 before the rulebook was published. They never appeared in any of the background at the time, and no other models were made.

I painted up the latest piscean warrior broadly to match the paintjob I did on the homage sculpt, keeping the colour scheme that is based on a yellow-headed moray eel: 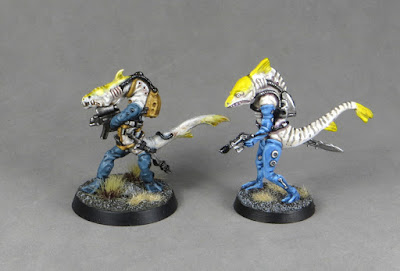 You'll notice that I chose to render the body as being naked with straps this time round (unlike my 2004 paintjob). It is not clear at all whether the sculptor intended the pisean warrior to be wearing a full body suit, top or even to be naked apart from gloves and boots. In the end, I decided to use Diego's modern sculpt to inform my painting on the classic figure. 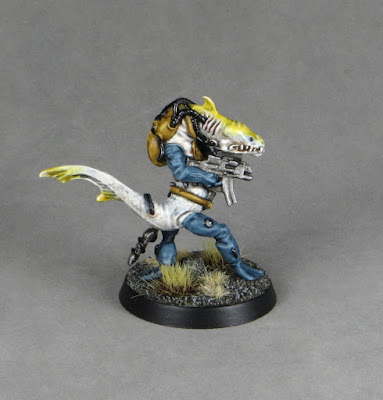 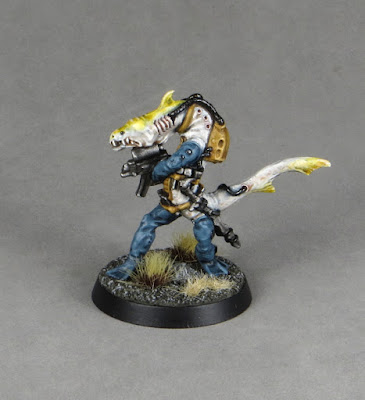 In spite of all the uncertainty on the details, I absolutely love this figure. It has a great bulk and fun dynamic pose. The head is beautifully rendered too. 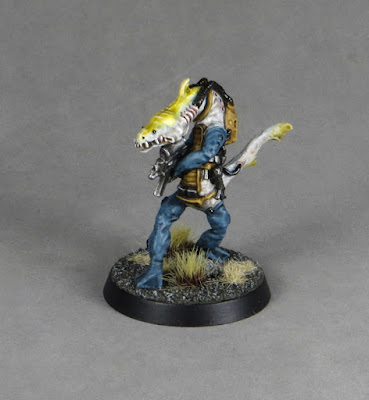 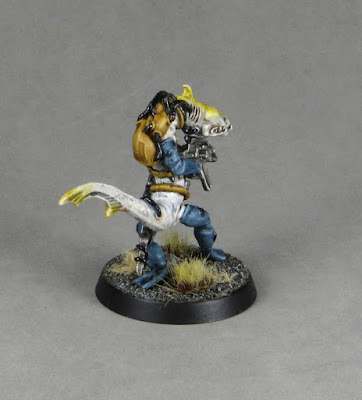 Whilst I kept the colour scheme close to my Knightmare Games figure, I dialled back the brightness in a couple of areas to keep the overall feel more muted. The use of the blue and mustard yellow were a deliberate way of tying the figure to Inquisitor Clousseau's crew, where I think the piscean warrior fits perfectly. 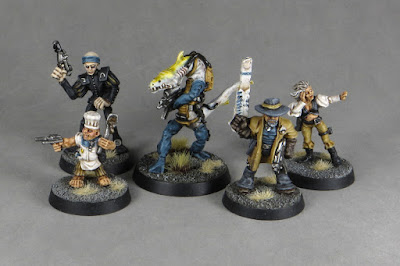 You'll also notice that I stuck the pisecean warrior on a nice new chunky 32mm base to avoid the legs looking cramped and restricted! All in all, I'm pleased to get the figure painted, even if it is embarrassingly long overdue!