Bulldog Lopez posted a really cool building he'd built from classic Necromunda bulkheads on Facebook the other week. The design worked brilliantly because of its simplicity - the bulkheads were just glued together and a roof dropped on top. I'd been holding onto some bulkheads with some much more complicated plans in mind, but hadn't got round to attempting anything. Being shown a simpler and effective option got me motivated to make some buildings of my own.

My design brief was as follows:


I figure if I can make 5-7 buildings, perhaps with a bit of flexibility in configuration, that will give me a nice little settlement to use.


First up I decided to make a basic standard hab. This will be the template for most of the later buildings in terms of configuration and dimensions. The hab is constructed from six Necromunda bulkheads, a couple of types of plasticard and some plastic strip/rod. The roof hatch is from the GW Ryza ruins set.

I painted the hab up by spraying grey, using masking tape to paint the yellow stripe, then drybrushing the whole thing with a light brown. I used an orange brown to add some rusty details. 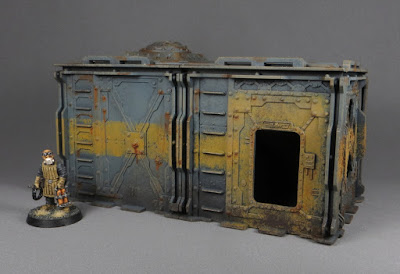 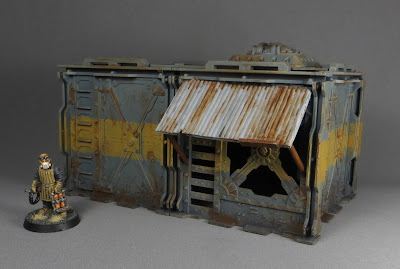 I wanted a commercial property for the second building and settled on a food vendor. I glued the bulkheads differently to make this one slightly longer and thinner. The shutters are more corrugated plasticard, whilst the sign and serving counter are cut from slightly thicker plasticard. I added some bits from GW kits, the most important being the knife and fork logo (a Blood Bowl Halfling counter). 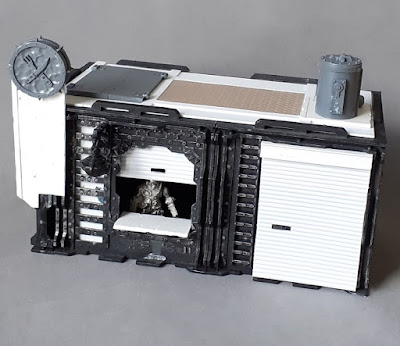 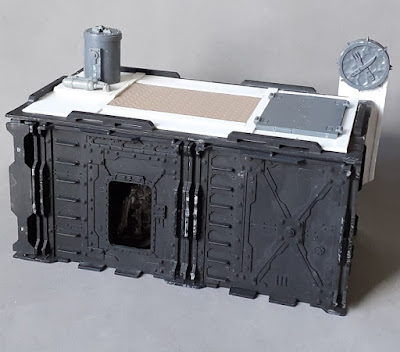 Broadly speaking, the paint job was similar on this hab, although I increased the colour with an eye-catching red to entice customers in!

The graffiti stencil is my favourite part of the paint job - made by actually making a stencil from paper and stippling paint around it. Some of you Confrontation fans might recognise the logo! 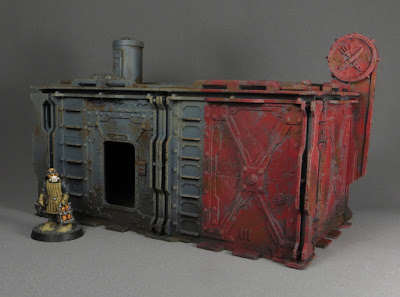 I enjoyed making and painting these so much that I've already made another couple of buildings and have planned out more after that!