In 2018 I played a bit of Dracula's America in a sci-fi setting. In fact, we had a big old showdown at BOYL 2018, where my Stetson-wearing Imperial Guard masqueraded as a small Dark Confederacy team.

At the time, I'd always intended to add to the group, and as I'm not really working on any projects to a particular deadline currently, I decided to go back and finish off the southern style gent I'd planned. 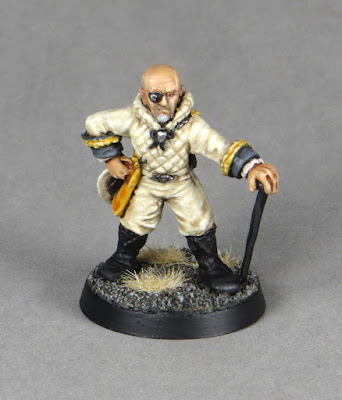 Colonel Sanders Del Monte was intended to evoke the sort of cream linen suited type who might oversee their large estate (or possibly the careful selection of tropical fruit). He might also pass as the sort of gentleman with enough enthusiasm to bankroll a xeno-archaeological dig.

The figure was made from a Rogue Trader psyker with the addition of a pair of arms from a Foundry historical figure. I actually made the first rough conversion in (I think) after picking up the Foundry figure from the £1 bargain shelves at Bring Out Your Lead 2014. 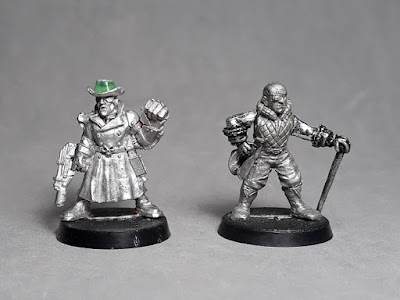 As this WIP photo shows, I filled the gaps between arms and torso, as well as adding a little goatee beard and the bootlace tie. It's not immediately obvious from the photos, but I also resculpted the rear of the bald head because of the devastatingly bad mould slip on the figure.

When I came to painting up the Colonel, it was obvious that I should have taken better care in prepping the figure when I converted and undercoated it two years ago. The psyker model is a shocking cast, with gigantic mould slip and undefined details at the sides of the torso and in between the legs. Because I only really grasped quite how bad it was part-way through the painting, I decided to plough on and hope that paint would hide the worst of it! 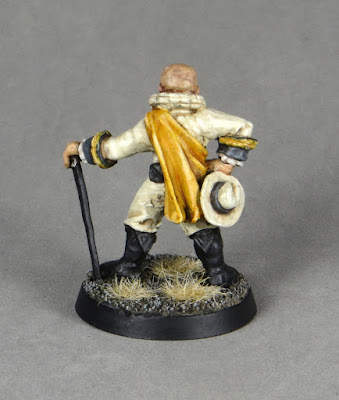 The resulting Colonel is certainly rough around the edges, and is nowhere near my best work. That said, I'm more than happy to get him finished after being WIP for around about 6 years!