There are some fantastic people in the miniatures hobby, and over at the Oldhammer Community Facebook group, Aaron Thompson has run a couple of giveaways. The only rules - "stay home, stay safe and start painting!"

Aaron has kindly gifted and sent a selection of figures out to other hobbyists with the only intention that the recipients will get a few hours of fun from painting them up. I stuck my hand up for an Epic Imperial Knight Castellan and did indeed get a few hours of fun painting it up once it arrived. I painted up a Knight Warden in the same sitting and am now the happy owner of a slightly under-strength and mis-matched Knight detachment! 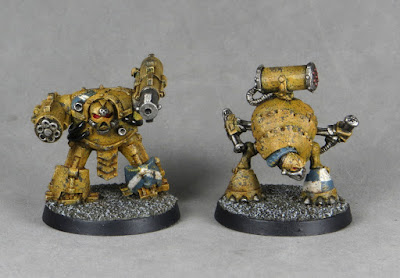 I chose to paint both in a battered yellow colour scheme with blue and white accents to mimic the heraldry often shown on Knights. I also mounted them on 30mm bases rather than 25mm to avoid that annoying overhang. 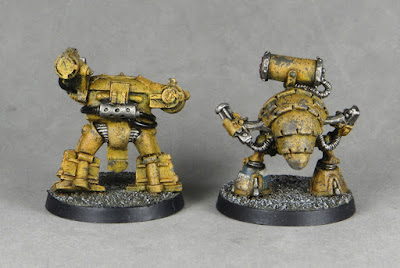 In retrospect, I think I dulled down the yellow a bit too far (I washed with sepia then brown, when I probably should have just used the sepia), but they do look like they've been through a few battles!


I love that the Epic Knights are (by and large) scale agnostic, as it allows me to use these as 28mm scale robots alongside others I've painted previously.


I'm delighted to have had the opportunity to paint up the Knight, alongside the other one which had been neglected in a box for ages. Thanks for the kind gift Aaron!