I know that the Inquisition hangs around with the Deathwatch or the Adepta Sororitas a bit, but they're overkill when it comes to an every-day world of the Imperium setting. Storm Troopers and Tempestus Scions are a little bit militaristic. So I'd put aside a few Imperial Light Troopers (AKA No Face Fargo) and Garrison Troopers (AKA Kylla Conditti) with the intention of using them as a tools of the oppressive Imperial regime in a mundane, non-battlefield setting.

And so, along comes January and a new painting challenge on the Oldhammer Facebook group. The rules of 'Naismithery' are simple - pick one or more models sculpted by Bob Naismith and paint it within the month of January. It just so happens that Bob sculpted both No Face and Kylla...


I put together a 5-man squad comprising of two Imperial Light Troopers (Fargo), one Garrison Trooper (Conditti) and two conversions. 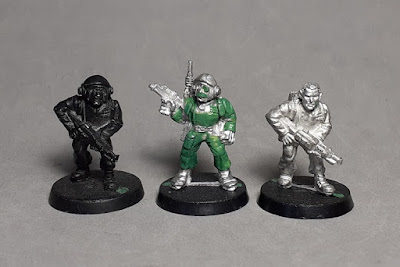 The bare-headed trooper (right above) is simply a Garrison Trooper with the head from Major Magnum from Citadel's Rogue Trooper range - a figure also sculpted by Bob Naismith.

The Commando officer was made from Major Magnum with the Garrison Trooper head and some extensive over-sculpting.

I painted the squad up in a sinister black uniform with grey packs and webbing. I did debate the visor colour for a while and was advised that glossy black would be too Star Wars, so I went for a nice bright orange. 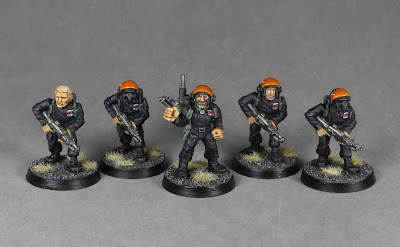 I may yet repaint the officer's bionic eye blue as I'm not entirely happy with the red, but for now it's done! 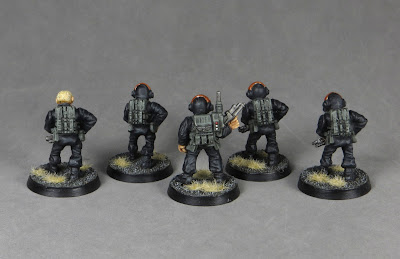 I enjoyed painting this squad very much - they were relatively quick but look pretty striking. In fact I'm already assembling some other figures to add a second squad and some specialists.