Venators are Coming To Town

They're making a list.
They're checking it twice.
Gonna find out who's naughty or nice.

Nothing could be more seasonal than painting up a bearded man in a pointy hood, right? What about if the beard is sculpted onto a rather scary mask, and the hood is tied up with a noose? That will probably scare the children! And I guess that's the point of Venator gangs in Necromunda - they are sinister vigilantes hunting down the most dangerous of criminals.

A gaming opportunity arose to play some Necromunda with my good friend cheetor. After looking at my variety of Necromunda gangs, I decided that the best option would be to use the meet-up as motivation to paint up the remaining pair of Confrontation Venators from Marauder that had sat undercoated since I painted up the other figures back in January.

Like the previous two figures, these are Aly Morrison sculpts. They might have chunky details, but they really are a pleasure to paint. 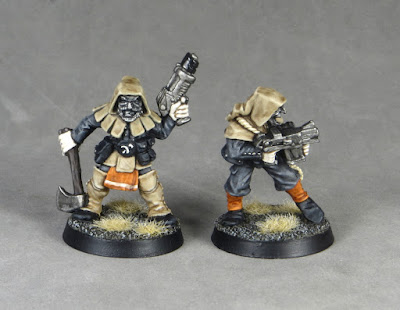 I'll be using the axe/pistol Venator as my leader, whilst the other Venator will be a standard Hunter. I misremembered my painting recipe from the earlier figures - using the wrong grey and being too heavy handed on the brown wash on the khaki hoods. But a little variation is fine in a gang where there is obviously individual preference for outfits and wargear. I originally painted the leader's gaiters white, but it looked awful and drew the eye away from his face. It was a bit of a hassle to repaint them at the point where I'd otherwise finished, but I think it was worth the effort. 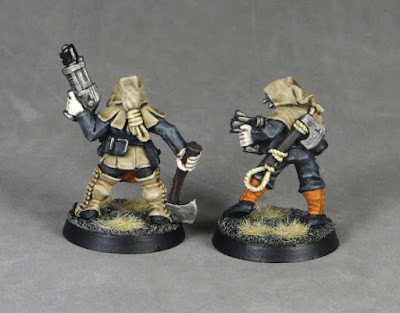 Here are the four Marauder Venators together. You can see that the hoods are paler on the other two, but that's fine. For the games with cheetor I will mix in a few of the other plastic Venators I converted up last year. 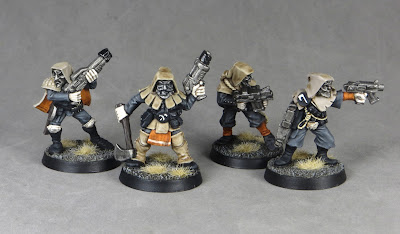 I still plan to add to this gang - I fancy making some other period metal conversions to bulk out the numbers to give me a viable long-format campaign gang. But for now, these will do!