So Bring Out Your Lead 2019 has passed in a flash yet again. Several months of preparation and building anticipation, and the weekend has gone by in intoxicating mix of gaming, drinking and meeting friends old and new.

If you're not familiar with BOYL - it's a free-form annual event hosted by the Ansell family at Wargames Foundry in Newark. Three days of gaming primarily using figures and games from Games Workshop's late 1980s and early 1990s output. This year you might have bumped into (amongst others) Rick Priestly, John Blanche, Tony Ackland or Trish Carden. I suspect this year was the largest yet. Certainly the most international, with attendees from Scotland, Ireland, France, Italy, Poland, USA and Thailand. A group of us spent the Friday at Warhammer World, before heading to Foundry on Saturday.

The warband of my chaos champion Ctzezmu strode onto the field of battle, intent on wreaking havoc and destruction on their rivals. Indeed the Hounds of the Dog God were victorious in their opening foray, but at the cost of many warriors (casualties carried over between games, and I lost a big chunk of my warband after both of the first two games!). 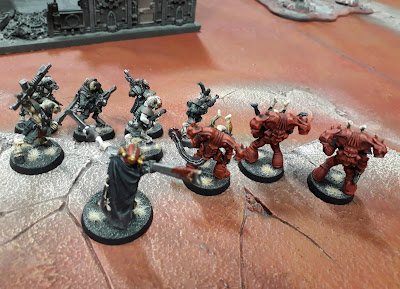 My Saturday morning was spent playing on Nico's incredible 3D Space Hulk board. I'm in total admiration of not only the board, but also the efficiency of his preparation, custom tokens and cards, as well as his wonderful GMing. On the day myself and 3 others played a brutal mission. I ended up taking partial charge of the genestealers with Blue in VT, while Mr Papafakis MkI terminators teamed up with airbornegrove26's TMNT equivalents. Being fully absorbed with the game (where our genestealers effectively prevented the terminators escaping the board), I didn't take any mid-game photos. I did however take the opportunity to place my salvage crew in a desperate scene after the game! 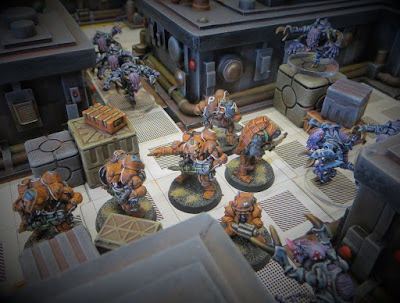 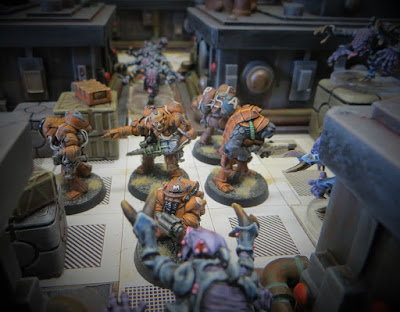 The Shicklgruber Grab is a Strontium Dog storyline that sees Search and Destroy agents heading back to the dying days of WWII to apprehend Hitler. Each player fielded a Strontium Dog with the aim of capturing and then escaping with Hitler. I fielded Sourmouth Clancy, and Hornby Toad also saw action.


This was a fantastic fast-paced game using Warlord's Strontium Dog rules, that was run three times with different participants. The Germans proved no match for the advanced weaponry and abilities of the agents, meaning that the biggest danger was another Strontium Dog!

My final game was the one I ran - a racing game featuring 15 competitors riding everything from mutie steeds to fume-belching warbikes. When you see that people have created lunatic creations such as tortoise-riding squat Genestealer hybrids and raving preachers atop an 8-legged lizard, you know they're invested in the race! We even had a nomad riding a big cat sent to me by John Robin, who wasn't able to attend BOYL!

We set up the game in the courtyard to take advantage of the cooling evening air and the extra space around the table.

As you might expect, the race was somewhat chaotic, with lots of fun moments. Mr Papafakis decided to run his beetle-rider in reverse, meeting the other competitors halfway round. Garth played his chaos spawn  true to type, charging anything and everything in range. And for some reason, Mr Saturday's award winning hybrid mutie rider was a key target! 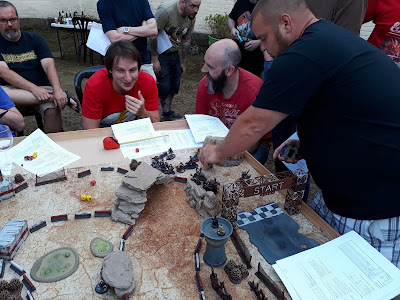 The race was eventually won by Whiskey Priest's mutie rider, who had managed to escape the melee in the pack pretty much unscathed!

Phew. What else did I do? I chatted with John Blanche and Tony Ackland. I picked up the new Fishman Foundry had cast to match ones they'd made available at earlier BOYLs. I generally soaked up the atmosphere and had a brilliant time!


This year's commemorative figure was dwarf bandit Connie and her faithful hound Blythe, kindly cast by Foundry and funded by some of the members of the Oldhammer Facebook group. 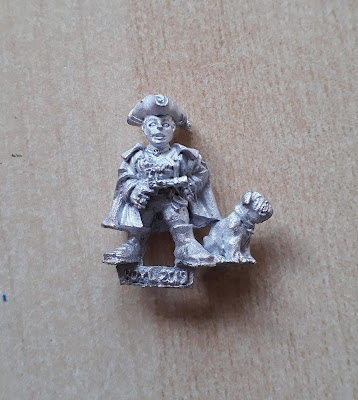 The figure was sculpted by John Pickford and is a really lovely sculpt! 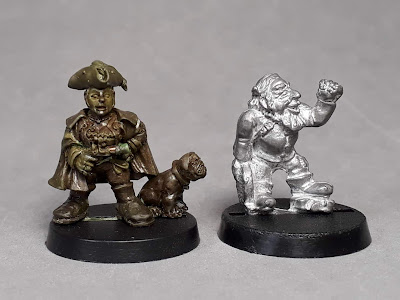 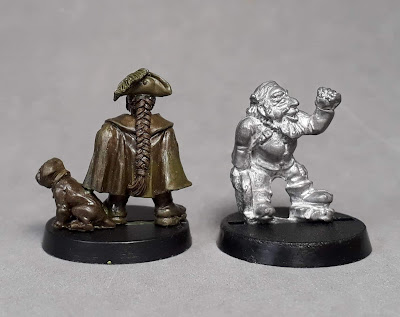 I think that sums up my BOYL 2019 - I can't wait for the next one! Thanks to Foundry for hosting, all the organisers, and to all the great people who ran the games I played in. See you next year!
Posted by axiom at 12:44