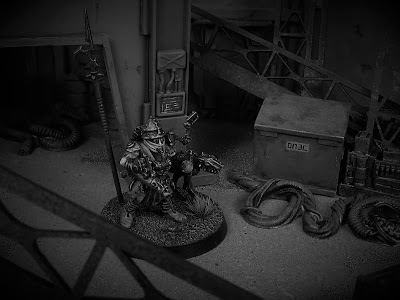 Back at the start of June, 28 Magazine launched an exciting painting and modelling challenge - to create a model inspired by the artwork of Ian Miller. I'm a huge fan of Ian Miller's artwork - as anyone who has ever opened a copy of Rogue Trader, Slaves to Darkness or Ratspike inevitably is! If you're not familiar with Ian's work, I urge you to check out his website www.ian-miller.org. 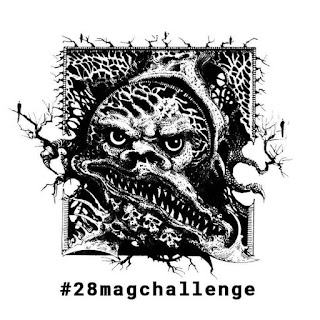 ++THE IAN MILLER 28 MAG CHALLENGE++
It is with great pleasure that we announce the first ever 28 Mag Challenge open!
The challenge is to create anything inspired by the artwork of Ian Miller. It could be Dark Age of Sigmar, INQ28, a single miniature, a unit, trees, fish, weird buildings – anything you want to make, as long as it is clearly influenced by the artwork of Ian Miller.

I immediately knew that I wanted to attempt to create a Confrontation / Necromunda scavvy in the style of the concept sketches that Ian drew back in 1989. If you've not see these before, you can see images of the full set, plus some of Ian's thoughts in this blog post from 2014. I'm lucky enough to own one of the sketch sheets (show below), and it would be a challenge to translate these uncomfortable, spikey characters into a 28mm gaming piece. 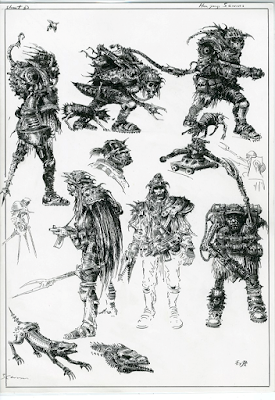 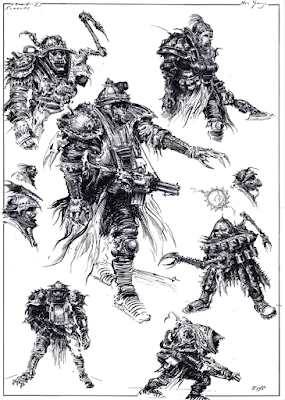 There's a strong family resemblance to the scavvy sketches and Ian's later work on James Herbert's The Stranger. The images below are all from The Art of Ian Miller published in 2014. You can see that the posing, gas masks, robotic dogs, helmet and gun shapes are common to both the scavvies and The Stranger. 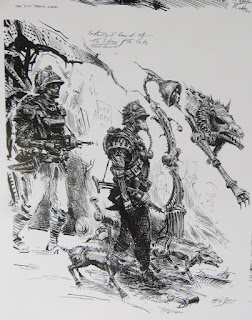 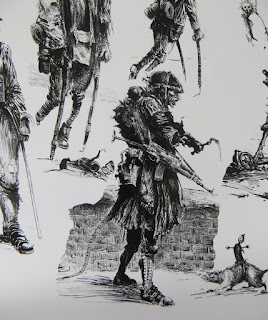 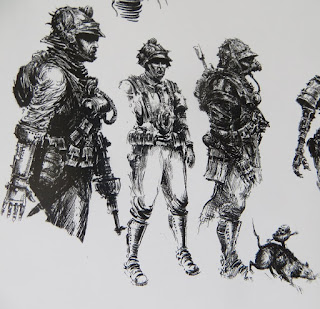 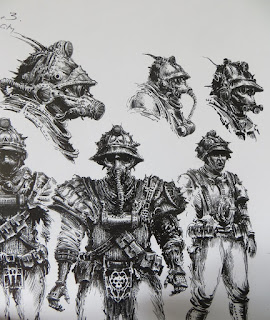 So armed with these influences, I set about establishing the criteria for my Ian Miller-inspired scavvy. He should have the following features:


In addition to those modelling features, I also wanted to make sure that the figure would fit in with period Confrontation scavvies stylistically - too far down the route of spikes and protrusions and the figure wouldn't stand up to tabletop play and would likely look strange in with a gang of 'standard' scavvies.

My first step was to assemble some likely looking components to play around with how they looked together. I picked out a suitable base figure (a Jes Goodwin Confrontation scavvy) and dug out a spare Enforcers cyber hound to accompany him. I found a pre-slotta half orc with a pretty good helmet shape, and an old Rogue Trader gun which also fit the bill. 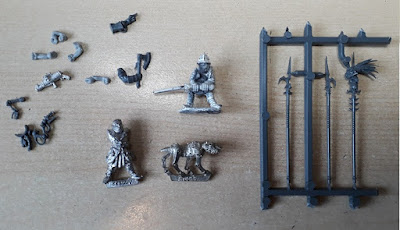 For my first mock-up I blue-tacked some elements just to see how they looked. At this stage I was considering slinging the gun across the chest and having my scavvy hold a trophy pole or similar. I hadn't yet worked out how the prosthetic claw would be mounted either. 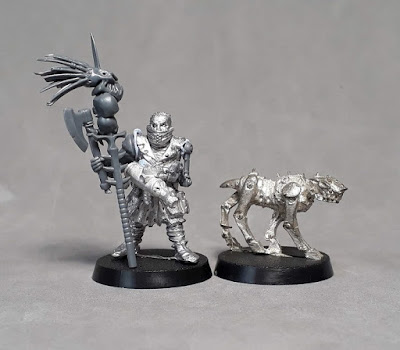 After making some decisions, I worked out that the gun would look better slung to his right-hand side, with his arm resting on it. I also did the only surgery involved - removing the helmet from the half-orc and slicing the top of the scavvy's head off! 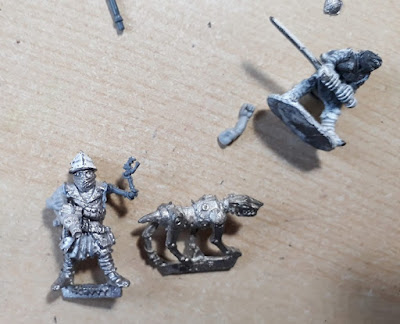 From this point onwards, the basic configuration of the model was set, and I started covering the damage and adding layers of detail, including: 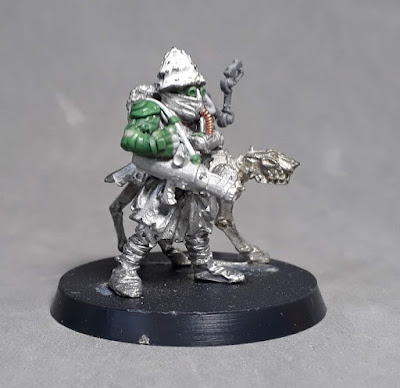 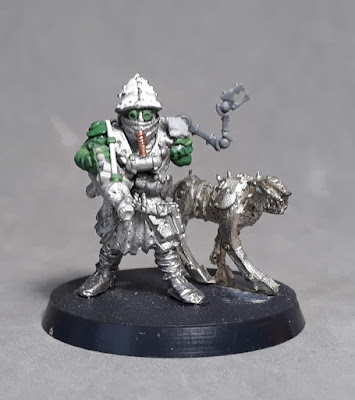 On his left side and rear, more details: 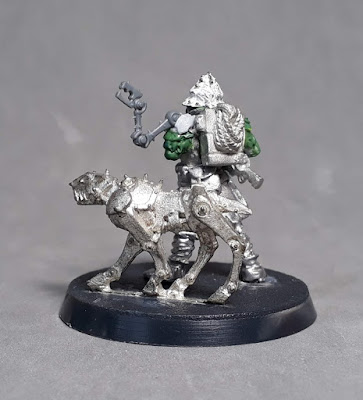 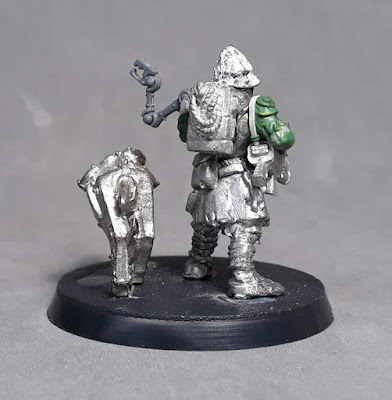 Deciding on a colour scheme was perhaps the biggest challenge. Ian's concept pieces are monochrome, and I wasn't able to find a directly comparable colour piece. Not only that, Ian's use of colour is very distinctive. I wasn't at all confident that I'd be able to both evoke his artwork and produce a figure that wouldn't look out of place amongst the rest of my collection.

After some thought, I selected the two pieces of artwork below to inform my colour choices - in particular the use of oranges and yellows. 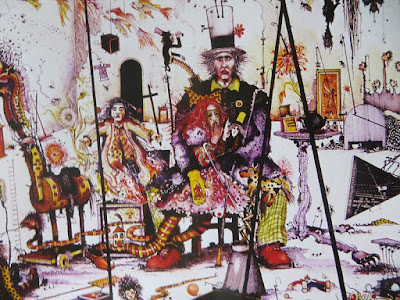 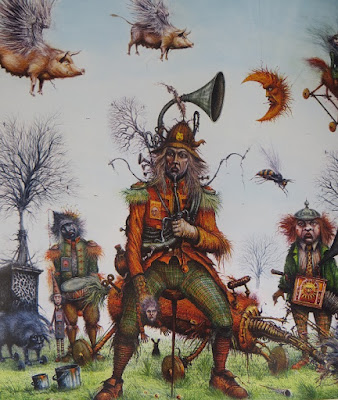 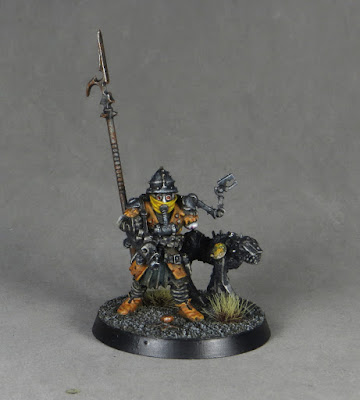 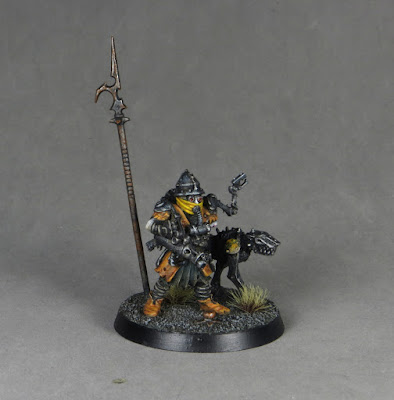 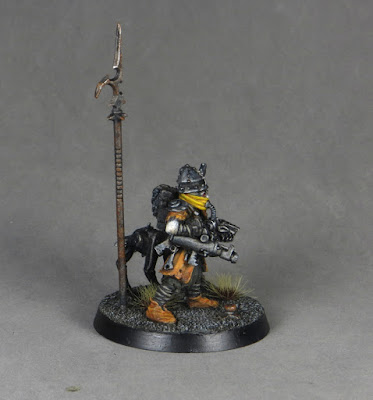 I attempted to paint using different techniques to my usual approach, by starting with a zenithal spray of grey over a black undercoat. After a drybrush with white, I then painted very thin layers of colour, followed by washes and drybrushes for the highlights. 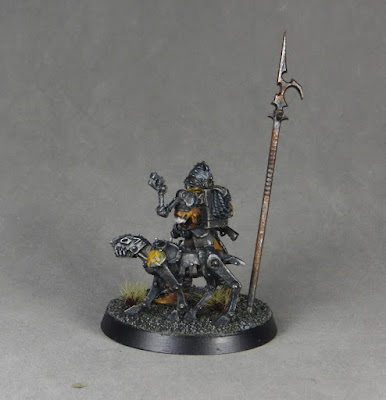 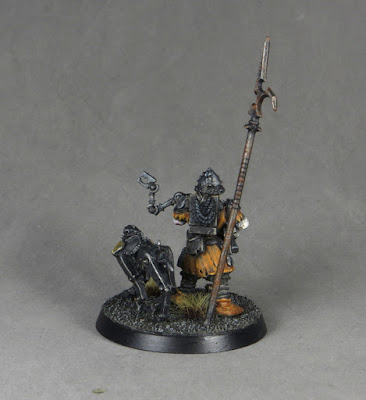 I'm not sure I completely nailed the way Ian uses colour - I suspect I should have included more blue (or possibly green!), but I'm happy enough that he channels a little of the vibe, whilst not looking out of place on the table. I'm pretty keen to look at painting up more scavvies to accompany him with similar schemes.

I am however really pleased that the #28magchallenge has prompted me to make a figure I hadn't even conceived of a month ago! Looking forward to seeing all the entries finished up and submitted - some of the WIP figures I've seen have been astonishing!
Posted by axiom at 12:13