Shortly after making my 5-strong Terminator stand-in salvage crew a few weeks ago, it was pointed out that my big robot was on too large a base. Not too large for the model, but too large for the 3D Space Hulk terrain they were going to be deployed on.

Rather than worry about wasted effort, I decided to embrace the opportunity of adding a couple more figures to the crew. Both of the new additions are slightly more exotic than the previous troopers, being an abhuman and an alien.

Irn-Bonce the squat is the very first space dwarf seen in 40k, hailing from the March 1987 releases. His rounded armour is a great match stylistically to the LE10 power armour troopers, and his weapon (later listed as a grenade launcher) could easily stand in as a heavy flamer / blast type weapon in Space Hulk. 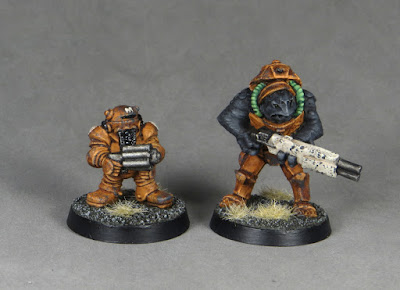 His mate is the first alien in the squad. He's a soldier of fortune from North Star's Rogue Stars range. I picked him to add a little interest to the crew, but also because his hunched form and silhouette very nicely mirrors that of the LE10 troopers. 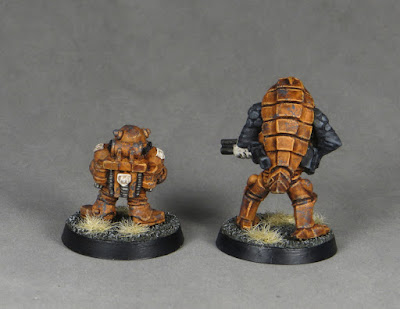 Both new members of the crew received matching paint schemes to the original crew. The only real point of difference being the grey skin on the alien. 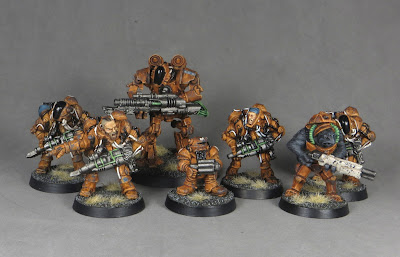 I really fancy adding a couple more figures to the crew - I've got plans for a smaller abhuman and a different support unit. Looking forward to getting round to them!