The Path to Damnation - Starting a Chaos Renegade Warband

This year as part of the annual Bring Out Your Lead (BOYL) event hosted by Wargames Foundry, myself and a group of friends are going to be playing some Rogue Trader using the Chaos Renegades rules as presented on pages 231-239 of Realm of Chaos: Slaves to Darkness (StD). Note there is a little fettling and fudging to cover available figures and wargear. 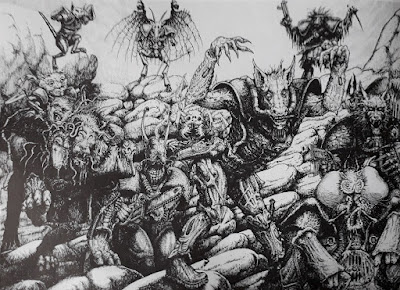 The set-up is pretty straightforward. Each participant generates their renegade and four groups of followers. Over the course of a day, we will play multiple games in a campaign type system.

The Renegade's Profile and Abilities

Step one in the creating the warband is to generate the chaos renegade. On p233 of StD is the Renegade Starting Profile table. A D100 roll of 35 sees me generate a human renegade. A second roll of 51 means that he's a human champion with middling stats. After generating the renegade, it's back to p35 in StD to generate his abilities as a champion of chaos.

The next step is determining which god he will follow. I decided that I wanted my warband to be devotees of Khorne. As champion of Khorne, my renegade automatically gets a suit of chaos armour, and receives a single roll on the Rewards of Khorne table. I roll a D100 result of 8 (how auspicious!) and he is bestowed with a face of a bloodletter (which gives him a poisonous bite and the ability to spit acid among other things)!

Next, my renegade receives a chaos attribute, rolling a D1000 result of 469 on the Personal Attributes table to receive horns (+1 attack and +1 fear point).

Finally I receive a roll on the Chaos Rewards table. A D100 result of 24 means it's a second chaos attribute roll. This time I rolled 392 to become fast (+3 to his move).

The Renegade's Wargear and Equipment

I know I have a fast and potentially fearsome fighter (although he'll struggle if he has to go up against a Marine or Zoat major hero! Wargear is generated "according to his starting profile". This means cross-referencing against the weapon generation charts in the Rogue Trader rulebook. There's no specific chart for humans that are not members of the Arbites, Custodes or whatever, so rolled a D6 to determine which of the equipment charts for humans on p141-2 I would get access to. A result of 3 gives my renegade access to the equipment of a low-level Adeptus Arbites. He automatically receives a sword, and a D100 roll of 12 means he also gets a bolt pistol. There is also a 50% chance of getting some more exotic weaponry, which I failed!

So the leader of my warband is an imposing champion of Khorne - a fast and competent if not deadly fighter, having been rewarded with chaos armour, horns and an acid-spitting daemon face! His weaponry of a sword and bolt pistol is basic, but I assume effective enough!

We have pre-agreed that each champion of chaos will receive four D100 rolls on the Renegade Follower table (p236-7 of StD).

I'm delighted by this result. Even though the entry states that halflings "rarely choose to follow the Blood God, and Chaos Renegades of Khorne may roll again", the thought of little chaotic halflings amuses me. Oh, I'm also going to call them ratlings from now on. From my D3 result I gain the full unit of three. I choose to equip them with flak armour, and fudge the roll on the standard weapons and close combat weapons charts to give them needlers and laspistols. Finally, these little fellows receive a dominant attribute. Over to p138 in StD I go and receive fangs (extra bite attacks in combat!). 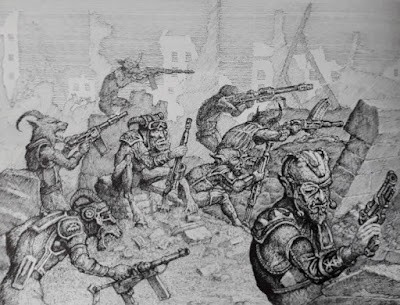 Beastmen are the iconic chaos troops in some ways, so having a squad of braying goatmen is great. I gain six from my D6 roll, meaning that in addition to their standard weapons, I gain a roll on the heavy weapons chart. As with the ratlings, I fudge the standard weapons and close combat weapons rolls to give them all autoguns and combat accessories. The unit gains a heavy bolter with targeter and suspensors from the heavy weapons chart. For their dominant attribute, the beastmen are Strong - an increase of +1 to their strength characteristic. Excellent!

This is fun! Why would an Inquisitor go rogue and throw in his lot with the forbidden powers? There's lots of potential to make a fun character who is clearly second in command and could even be the power behind the throne. Individual characters get personal attribute, weapons and equipment rolls: my Inquisitor gains a bolt gun and chainsword, mesh armour, frag and tanglefoot grenades and finally a useful conversion field. For his single Personal Attribute roll he gained Irrational Hatred of Goblins (gretchin I guess!).

Whilst I do have squats, they're earmarked for another project, and to be honest, I wanted to include some World Eater traitor legionnaires. So I swapped the squats for the renegade marines. To avoid over-powering the games, we receive D6 legionnaires as opposed to a full squad of five. I rolled up three tactical marines with bolters, meaning my warband will have a solid core of fighters to act as a suitable bodyguard to my champion. For their dominant attribute, they received poisonous bites - again additional bite attacks in combat!

So after all the rolling and generation, I have a mid-sized warband containing some varied and interesting followers:

Whilst I don't have any muscle in the form of ogryns or zoats, or some of the large numbers that can be rolled up, I have some competent troops backed up with two decent characters. There's also some scope to make some unique, fearsome Khornate figures. This should be fun!
Posted by axiom at 15:33