When I rolled up my chaos renegade warband, I think the unit I was most pleased about was the three ratlings. Not because ratlings are iconic followers of chaos (the reverse is probably true), but because I've always enjoyed modelling and playing with figures of a ratling's stature. I even made a full ratling Inquisitorial retinue after all!

I already had four or five spare ratlings, so it was a case of selecting three to work out how to chaosify them. To my mind, the key change needed was a head swap. The classic Rogue Trader ratlings have beaming round faces - not the sort of look that a trio of corrupted ratlings would sport. In a case of serendipity, I also happened to have a selection of Maxmini's Fallen Legionnaire heads (left over from an aborted Blood Bowl hobgoblin project).

I cut off the original heads, replaced them with the nasty chaotic ones, and sculpted new collars: 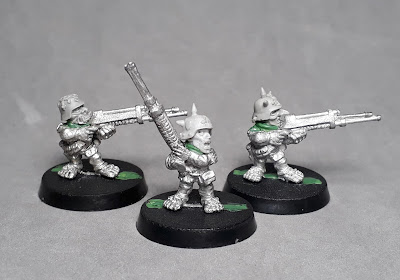 After that, it was simply a case of selecting a suitable colour scheme to fit with my Khornate theme:


I went for a pale green-tinged flesh, with yellow eyes and touches of purple. The red was washed with Agrax earthshade to dull it down. I was pleased with the brass masks, which were gold given several washes of brown and black. 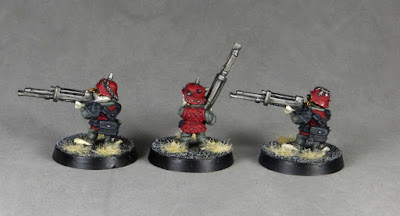 I think the pale flesh, grey clothing and deep red armour is just about right for Khorne. I'm really pleased at how much the look of the figures has changed with just simple head swaps and colour choices.

The contrast between the bright loyalist ratling and his renegade counterpart below just illustrates the point! 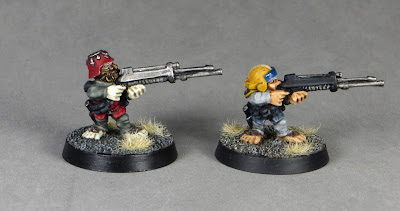 I've started building some of the six beastmen I'll need, and have put the finishing touches to my renegade Inquisitor conversion. I think the Inquisitor will be the next on the painting table.