The path to embracing the dark gods is not the same for all traitors. Those who defend humanity in full knowledge of the power of chaos have the furthest to fall. An Inquisitor may be tempted by the power and riches of the dark gods. Or they may be corrupted into thinking that chaos can be used against chaos. Or they may become so disillusioned and world-weary, that embracing chaos seems the logical conclusion.

The second of my chaos renegade's followers I've chosen to create is my traitor Inquisitor, Drugh. He is a potent fighter in his own right, with an excellent array of wargear.


When I was looking at suitable figures to use for Inquisitor Drugh, I was looking for a figure which followed the same pattern as the Imperial Inquisitor models - well equipped and armoured in an esoteric and individual style.

After some debate I settled on using a rather obscure Blue Trooper from Citadel's short-lived Paranoia range. The painted example in the picture on the right below is from Matthew Sullivan's excellent Oldenhammer in Toronto blog (check it out).


I removed the slightly cartoony head, left hand and right arm at the elbow. I then added a new head and some weaponry to drastically change the look: 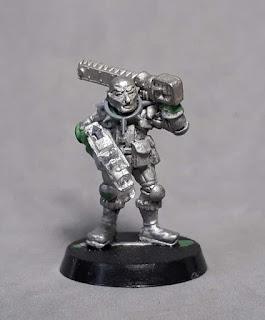 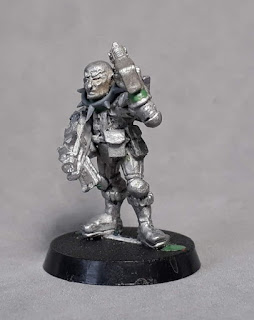 The head is from an old Citadel cleric, whilst the chainsword comes from a mid-1990s 40k preacher. His bolter is also a period Rogue Trader  addition, whilst his new lower right arm is from the Rogue Trader plastic Imperial Guard arms sprue. 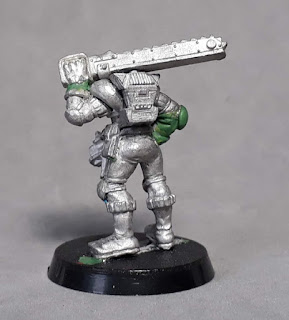 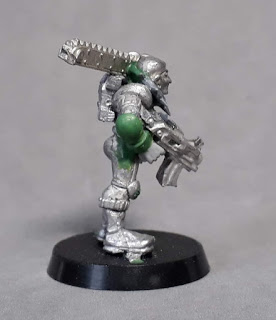 The final addition is his backpack, which might well be Denizen, but I forget. His new spiked collar was carefully cut from a plastic servo-skull, but for me is the key part of the conversion that turns him from mildly unsettling to nailed on bad guy!

Like the ratlings in Part 2, I went for a traditional Khornate colour scheme of red, black and brass. I kept his undersuit black, as I was envisaging that Drugh might have originally clad himself in a black outfit, then painted or added to his outfit as he gave himself up to chaos. 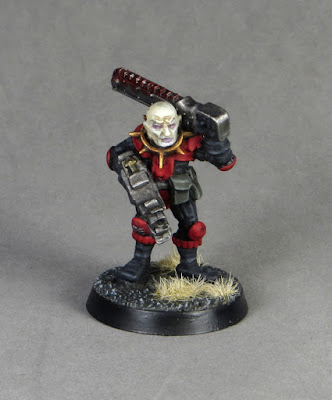 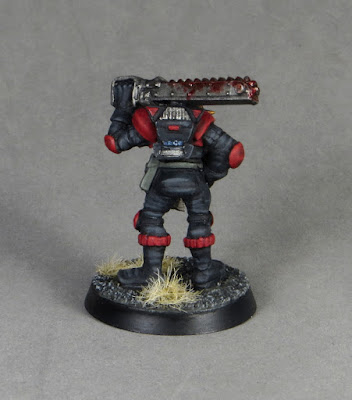 The colour scheme uses the same red, black and grey used on the ratlings, so they tie together visually. 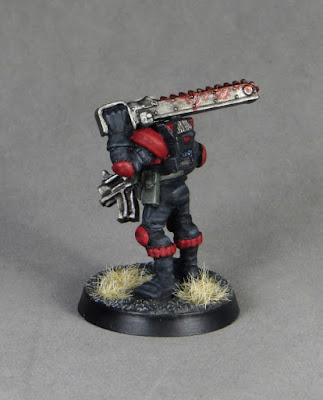 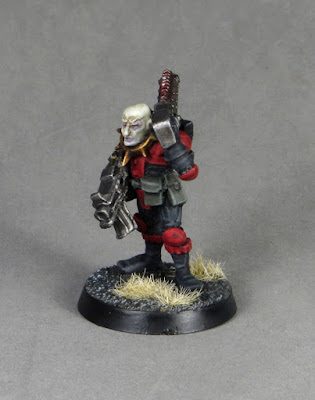 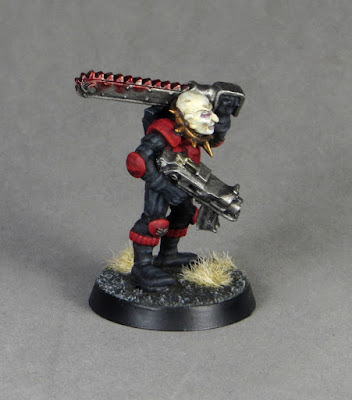 Drugh has given himself over to Khorne, so the spiked collar was rendered in brass (it could well be a collar of Khorne gift). The final step was to add some gore to the chainsword blade. Blood for the blood god after all!

The Path to Damnation will spiral on at some point in the near future!